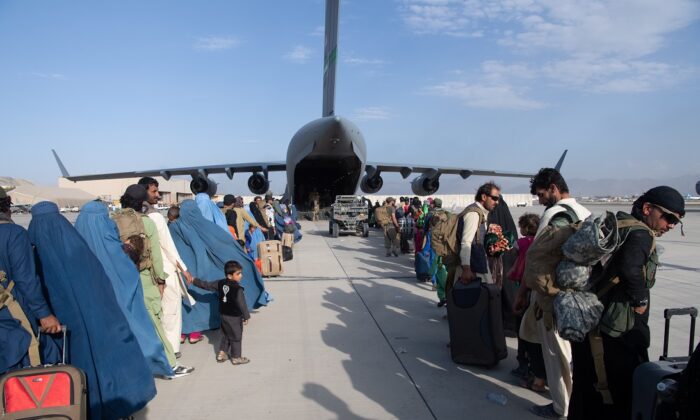 ‘Get to the Back of the Line’: Interpreter Feels Betrayed by US Government

A U.S.-Afghan interpreter with family stuck in Afghanistan has spoken out against what she describes as unforgivable negligence by the U.S. government. Amidst reports that the Taliban is conducting online surveillance operations against American allies in a possible revenge campaign, The Epoch Times has chosen to withhold the names of the interpreter and her family. This is their story.

During her roughly six-day ordeal escaping Afghanistan last month, a U.S.-Afghan interpreter was harassed by the Taliban, nearly trampled by stampeding crowds, and subjected to wildly inhumane conditions.

She expected that kind of treatment from the Taliban.

What the interpreter didn’t expect, however, was receiving similar treatment from her own government. She didn’t foresee being misled by her president, cursed at by Marines, or lied to by State Department officials.

She didn’t expect to have her family betrayed.

Now, the interpreter wants the American people to know how their taxpayer-funded officials turned their backs on countless allies and others in desperate need of help.

“I don’t like spotlights. I don’t want attention. I just want the American people to know the truth—that, I’m sorry, but our president is standing there, and the words coming out of his mouth don’t match what he did,” she said. “And I was there, I saw it, and it’s not okay. Someone has to be held accountable.”

A native of Afghanistan who moved to the United States following the Soviet Union’s invasion in 1979, the interpreter wanted to serve the country that provided her refuge.

Afghanistan provided her with that opportunity. During her time there, she worked with village stability teams operating out of Camp Vance in Bagram in 2012 and 2013, assisting U.S. troops and security contractors on numerous projects.

She told The Epoch Times that she was the first female to help coach then-Afghan commandos at the Afghan Special Security Forces ANA Special Operations Command— “I think that was the proudest thing for me, and I have a lot to show for on that,” she said.

After her stint in Bagram, the interpreter returned home to Idaho. But when the Taliban began retaking the country earlier this year, she knew she had to get her family out of danger.

Arriving in Kabul on Aug. 7, the interpreter thought she had until the end of the month to arrange for her sister and others to travel back to America.

Like so many others—including the entire U.S. intelligence apparatus—she was wrong.

“I told her to hurry up and go to Afghanistan in August and it would be safe—but to hurry up,” said George McMillan, a security contractor who worked with the interpreter. “And then the Afghan Army in the Pashtun-dominated areas just surrendered.”

The interpreter’s primary mission became getting herself and her older sister—who was the family matriarch following the death of their mother, as per Afghan cultural norms—on the soonest plane back to the United States.

Making their way through the streets of Kabul, they arrived at one of the security checkpoints outside of the Kabul airport. There, they waited.

The interpreter said they spent some 48 hours in line, standing under the scorching sun with no food or water, sleeping in garbage and feces, and dealing with the all-to-real threat of being trampled by throngs of would-be refugees. There were times when the interpreter passed out in her sister’s arms from exhaustion, and vice versa.

Finally, they made it to the gate, where the interpreter presented her American passport to a U.S. Marine.

At that point, the sister fainted. When she woke up, the sister asked to go home—where she remains to this day. Unlike the interpreter, the sister has lived in Afghanistan her whole life, and she gave up hope on ever making it to America.

Adding insult to injury, the Marines allowed an influx of refugees to enter the airport about 10 minutes after the sisters were booted to the back of the line. Few, if any, had documentation, according to the interpreter.

The interpreter’s heart-breaking journey wouldn’t end there. Nor would the abject horror.

After dropping her sister home, she made her fifth attempt to catch a flight. This time, she was with two cousins, one of them an Afghan national who works for the United Nations, and the other a former U.S. embassy employee. The Marines let them inside the gate, but they were not allowed to board the flight, she said.

A State Department employee told the cousins that “only American citizens were allowed aboard.” Therefore, it came as a shock to the interpreter when she boarded the plane to find “hundreds” of non-American Afghans.

“How are you going to sit there and lie to my face like that? A plane full of Afghans—none of them with the proper documents—yet you’re turning away an active employee of the United Nations,” she said. “He still had his badge. The other [cousin] was an active employee of the U.S. embassy. The State Department’s website says, ‘U.S. citizens plus their family’ [are allowed to board].

“But they were turned around, right there in front of the plane … I wish to God that I would have taken the name of that [State Department official] lady.”

Not only were the cousins replaced by non-American citizens on the flight home; the interpreter said she thinks a Talib may have been aboard as well.

She said she helped serve as a translator when the plane left Kabul, assisting those who couldn’t speak English. One man stood out to her in particular—and not for good reasons.

The interpreter said the man was questioned by authorities upon reaching the United States, but was still allowed in the country—where he’s likely at-large in America.

She took a brief video of the man on the plane and sent it to her former colleague McMillan, who shared her assessment about the person’s likely allegiance to the Taliban.

“He spoke only Pashtun, so it is impossible that he worked for the United States in any capacity,” he said, noting that the man was from the Khost Province. “Khost is almost exclusively Pashtun and therefore Taliban in the mountain range on the Afghanistan/Pakistan border.”

Some two weeks after her hellish ordeal, the interpreter is still bruised and battered.

She wants answers, and for people in power to be held to account.

Meanwhile, the cousins and sister are still in Afghanistan, living in danger from a revenge-driven Taliban.

The interpreter talks to them on a regular basis.

“They’re trying to survive. As you know, their biometrics and pictures, IDs and passports are all in Taliban’s hand. I know everybody likes to believe this fairy tale that the Taliban won’t do anything to these people,” she said. “Yeah, they’re going to do something to these people. They’ll be the first to be slaughtered.”

The interpreter is working with private groups to extract them, but she isn’t holding her breath. She’s certainly not counting on the U.S. government to help her.

She fears that last month was the last time she’ll ever see her sister.