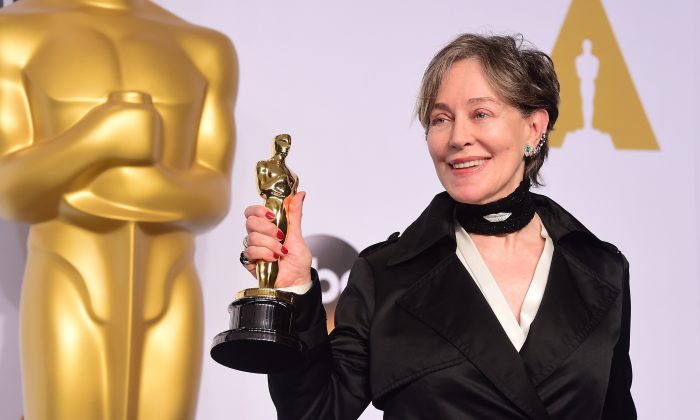 Get to Know Costume Designer of ‘The Grand Budapest Hotel,’ Milena Canonero

Culture minister Dario Franceschini also tweeted: “The (fourth!) Oscar for Best Costume Design to Milena Canonero is recognition of a great artist and more proof of the vitality of Italian cinema.”

Bravo to instant high-tech communications! I wonder how many other heads of states tweet? And global twitter messages of congratulations kept pouring all night.

Indeed, Canonero is one of the most honored costume designers in the history of the Academy Awards.
Born in Turin, Italy, she studied art, design history, and costume design before moving to England and working in small theater and film productions.

Her long career includes collaborations with numerous celebrated directors and movies stars. This is her ninth Academy Award nomination and the other movies for which she has won the Oscar for Best Costume Design were “Barry Lyndon” (1975), “Chariots of Fire” (1981), and “Marie Antoinette” (2006).

This was Canonero’s third partnership with Wes Anderson, the director of “Grand Budapest Hotel” whom she thanked graciously for his brilliant work which inspired her to create the award-winning costumes.

She collaborated with the fashion house of Prada on many of the costumes and although her hotel staff uniforms depicted the 1930s period, Canonero traded the look of the typical colors of the hospitality industry—various shades of grey (sorry, I was tempted to mention it)—to the more vivid shades of purple and mauve.

Canonero’s Oscar-nominated peers were costume designers Jacqueline Durran for “Mr. Turner,” Colleen Atwood for “Into the Woods,” Anna B. Sheppard for “Maleficent,” and Mark Bridges for “Inherent Vice.”

Just in case you missed ABC TV’s live broadcast of the Oscars on February 22, or you had to skip your glamorous walk on the red carpet, you can get very close to over 100 outstanding costume designs from 23 award-winning films which are featured in the annual “Art of Motion Picture Costume Design” exhibition at Fashion Institute of Design and Merchandising museum in downtown Los Angeles. For more information, visit www.fidmmuseum.org.