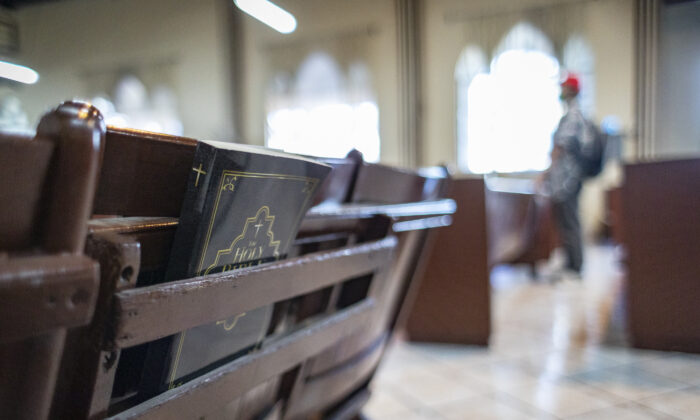 ‘Get Thee Behind Me, ESG’: Biblical Investors Disavow ESG

The embattled environmental, social, and governance (ESG) movement has another new foe: Inspire Investing, a Christian financial firm that renounced the term in an Aug. 18 blog post from CEO Robert Netzly.

“The hard left wants to say that ESG can only mean their view, in typical cultural Marxist fashion,” Netzly told The Epoch Times in an Aug. 26 interview.

“We just don’t want to be associated with that anymore.”

Inspire, which manages over $2 billion in assets, previously identified some of its funds as “faith-based ESG,” grounded in Biblical values. Unlike many other ESG-focused firms and funds, Inspire has invested in firearms companies—specifically, Sturm Ruger & Company and Vista Outdoor.

In an interview for a June article in The Epoch Times, Netzly was still an ESG advocate. At the time, treasurers from many energy-producing states were intensifying an ongoing campaign against ESG using their control over state pensions and other public money.

“We believe state pensions should not be forced to invest along any particular ESG guidelines, but should have the freedom to do so if they decide that is in the best interest of their constituents,” Netzly said in that June interview.

According to Netzly, as recently as a year ago, “nobody had a clue” what ESG meant.

“Today, everybody with a radio who’s a conservative knows what it is and it’s specifically evil, right? And it’s earned its reputation,” he continued.

“We see that battle lines have been drawn—not by us, but by the hard left—which squarely position us at odds with the ESG world that has been overrun by the intolerant, extremist viewpoints of hostile liberal activists. In our view, ESG has joined CRT [critical race theory] among acronyms worth fighting against,” Netzly wrote in his blog entry renouncing the term.

Notably, although Inspire has abandoned the term “ESG,” it will not alter the contents of any of its funds.

Yet the shift in marketing exemplifies a broader trend.

The Heritage Foundation, an influential conservative think tank, launched a new digital campaign, “ESG Hurts,” on Aug. 31. It includes model legislation for states that aim to fight the movement.

As noted previously, many states have tried to distance themselves from ESG, with state treasurers targeting firms they believe oppose their states’ energy industries.

On Aug. 24, Texas’s state comptroller issued a list of ten companies and 340+ funds that it claims are boycotting fossil fuel companies, as required under a 2021 law passed by its state legislature.

BlackRock, one of the companies Texas targeted, argued that their inclusion was “not a fact-based judgment,” given their heavy investment in Texas-based energy firms.

ESG’s swift rise in popularity has also led to concerns about ESG fraud.

A July 2022 report from Deloitte pointed out that attempts to tie pay to ESG compliance could incentivize fraud.

The Securities and Exchange Commission (SEC) has launched a Climate and ESG Task Force to target ESG-related misrepresentations by companies.

In May, the Bank of New York Mellon paid the SEC a $1.5 million penalty over misstatements about its ESG policies.

In June, that same agency issued a proposed rule on ESG disclosure. They claim the rule will promote clarity from firms using ESG in marketing while also spurring greater innovation.

It too met with backlash from a multi-state coalition of ESG opponents. Attorneys general from 21 states sent a letter to the SEC in August objecting to the rule.

They called it “deeply problematic,” arguing that it violated the First Amendment by requiring companies that rely on ESG factors to disclose greenhouse gas emissions associated with their portfolios.

Another debate concerns the appropriateness of including “S” and “G” in ESG. Netzly suggested that an anti-conservative interpretation of those elements of ESG helped spur Inspire to forsake the label.

The Economist recently argued ESG should be simplified to address emissions alone, with one special report asserting that it should be “streamlined.”

The United Nations’ Principles for Responsible Investment, a strong advocate of ESG, responded to the Economist. They argued that a singular focus on emissions has stymied real-world policymakers, leading to the advocacy of often unpopular solutions like carbon levies.

“The economic transition required to reduce emissions is also an inherently a social transition,” their blog entry stated.

A representative for U.N. Principles for Responsible Investment told The Epoch Times in a Sept. 1 email that they would not comment on the inclusion or exclusion of ESG by Inspire.

They added that their recent blog entry accurately reflects their stance on the broader debate over ESG.

ESG Pushback Not Always a Rejection of Stakeholder Capitalism

Dan Katz, a Trump administration alumnus, does not think the broadening rejection of ESG spells doom for values-based investing or the broader rise of stakeholder capitalism.

The 2019 Business Roundtable Statement helped usher in a new focus on stakeholders rather than shareholders, as it “[redefined] the purpose of a corporation to promote ‘An economy that serves all Americans.'” That dovetails with a new emphasis on values-based investing strategies, including but not limited to ESG.

“I think the reaction to ESG comes down to the fact that ESG has marketed itself as all things to all people, when in reality it’s impossible to reduce judgments as complex as environmental or social impact down to a single standard, let alone other things that are important to Americans,” he said in an Aug. 29 email.

“Therefore, it’s natural that ESG advocates (including the Biden administration) that are trying to impose the ESG agenda across the economy are getting pushback, as people realize that ESG is also too narrowly-focused on its core issues at the expense of many other priorities to be a standard across the economy.”

The stakeholder approach contrasts with the shareholder capitalist model, championed by economist Milton Friedman during the 20th century.

“How do you maximize value for shareholders? Well, if you’re an oil and gas company, you avoid oil spills and regulatory issues. You’ve got to take care of the environment while you’re doing your job. You’ve got to make sure that the communities you’re working in are not going to revolt against you. You can’t take advantage of supply chain labor issues in an unethical way because it’s going to come back and bite you,” he said.