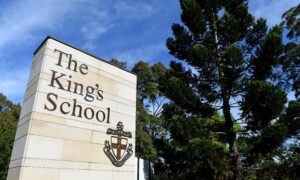 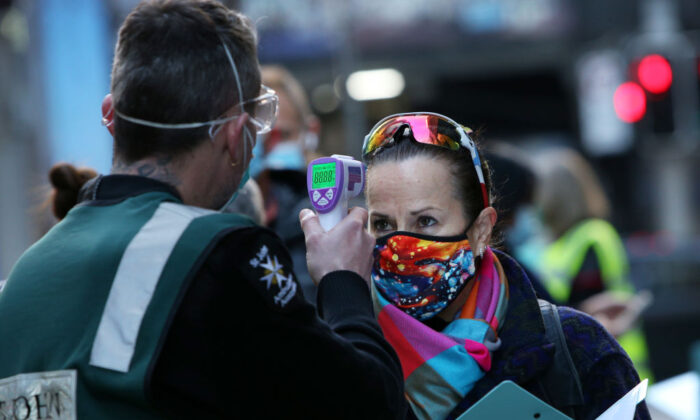 A St John Ambulance staff member takes the temperature of a client arriving at a COVID-19 Vaccination Centre in the CBD in Sydney, Australia on July 19, 2021. (Lisa Maree Williams/Getty Images)
Australia

Get the Jab and Win $10M: Think Tank Proposes Lottery to Speed Up Vaccination

The Grattan Institute has released new modelling showing that Australia can safely “live with COVID” once 80 percent of the population is vaccinated.

However, to reach this goal, the think tank is proposing a suite of measures—including a national lottery—to incentivise Australians to take the jab.

Currently, around 13.6 percent of Australians are fully vaccinated with two vaccine doses, while 31.4 percent have received one dose so far.

Danielle Wood, CEO of Grattan Institute, said, “We should throw everything, including the kitchen sink, at this. We can’t stay walled inside Fortress Australia indeﬁnitely, cut off from the rest of the world and periodically cut off from one another.”

One idea was for the federal government to establish a Vaxlotto, a national $10 million-a-week lottery where everyone who has one jab is in, while those with two jabs double their chances.

The think tank also suggests that vaccination hubs be opened across medical clinics, pharmacies, schools, workplaces and even supermarkets and sporting events. These should be bolstered by marketing campaigns targeting young and ethnic communities.

Grattan is basing these proposals on internal modelling that revealed that 80 percent of the country—and 95 percent of the most vulnerable—need to be vaccinated before lockdowns and restrictions can be eased.

According to the report opening the country when only 50 to 70 percent of Australia is vaccinated is still too risky,

The report also claimed that 10 percent of the population were ardent anti-vaxxers.

The report comes as Greater Sydney comes under tighter restrictions following a continuing increase in infections from the CCP (Chinese Communist Party) virus, commonly known as the novel coronavirus.

The city was undergoing a five-week lockdown due to an outbreak of the Delta variant of the virus, but as of July 28, this lockdown was extended by another four weeks, with the state government citing low vaccination rates and continuing infections.

Police powers have also been dramatically expanded, and the Australian Armed Forces have been called in to monitor compliance following protests on the weekend that saw thousands of Sydneysiders march through the streets of the CBD, calling for an end to restrictions.