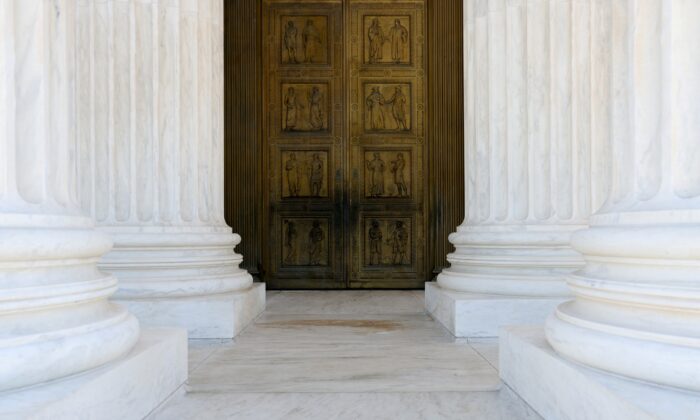 A general view shows the front doors of the U.S. Supreme Court building in Washington on Nov. 4, 2020. (Jonathan Ernst/Reuters)
Viewpoints

Get the Courts Out of Science

This morning, I listened to the oral arguments in the case of the Biden administration’s vaccine mandates as enforced by OSHA. It was a demoralizing experience.

I heard some crazy things, such as a claim that “750 million” Americans just got COVID-19 yesterday, and that 100,000 kids with COVID are in the hospital, many on ventilators. The correct number is 3,300 with positive tests, but not necessarily suffering from COVID. I further heard strong claims that the vaccines block disease spread, despite every bit of evidence to the contrary.

It was my first time hearing oral arguments in the Supreme Court. I might have thought that facts on the ground would actually matter to people who are holding the fate of human liberty in their hands. I might have thought that they would be getting their information from somewhere other than their political intuition, mixed with wildly inaccurate claims from bloggers and media pundits.

I was wrong. And that’s deeply alarming. Or maybe it is a wake-up call to us all. We have learned today that these people are no smarter than our neighbors, no more qualified to address complicated questions than our friends, and arguably far less informed than the Twittersphere about basic issues of COVID and public health.

The backdrop of today’s arguments is that 74 percent of Americans of all ages have had at least one shot. Meanwhile, case numbers are up 500 percent in many places, and 721,000 new cases have been logged throughout the country, and that’s obviously a large underestimate because it doesn’t count at-home tests, which are selling out in stores around the country.

The extremely obvious point—the most basic observation one can make about this data—is that the vaccinations aren’t controlling the spread. This has been granted already by the CDC and every other authority.

No matter what people say in retrospect, I seriously doubt that anyone would have predicted a future in which the pandemic highs would be reached following mass vaccination. It’s not only true in the United States but also all over the world. However much they help with mitigating severe outcomes of the disease, at least for a time, they haven’t been successful in stopping the spread of the virus. They will not end the pandemic.

And yet, so far as I can understand this, that’s the whole point of the vaccine mandate. It is to protect workers from getting COVID. There is no evidence that this is possible with mass mandates in the workforce. People can get and are getting COVID anywhere and everywhere, among which surely means the workplace too. The vaccine isn’t stopping that. What will bring this pandemic to an end will not be the vaccines but the adaptation of human immune systems, exposed and then developing resilience.

Apparently, there was not one mention of natural immunity during the oral arguments, which is truly astounding. From what I could hear, there was a strangely truncated environment in which no one was willing to say certain obvious truths, almost as if a preset orthodoxy had been defined at the outset. There were certain givens that simply were not questioned: that this is a disease without precedent, that the state can stop it, that vaccines are the best ticket we have, and that the unvaccinated have absolutely no good reason to remain that way.

To be sure, the oral arguments aren’t what decides a case. The briefs filed for the court are much better on the side of opposing the mandates, while the briefs for the mandates are filled with untruths that are easily exploded. In the end, it is very likely that the mandate will be struck down in a 6-to-3 vote. I’m glad for that. We should be relieved.

However, we need to do some serious thinking about what is going on here. We are talking about a mandate that profoundly affects the health and well-being of millions of people. The question of whether someone should take the vaccine is bound up with extremely complex empirical questions, and opinions run in every direction, from those who think it’s the greatest gift of modern science to those who think the vaccines themselves are not only dangerous but also unleashing ever more variants.

These are matters of science and should be subject to debate, with the final choices made by individuals.

What absolutely cannot happen in any free, civilized, and stable country is to have such fundamental questions of liberty and bodily autonomy adjudicated by a panel of lawyers who have limited curiosity in the science, a lack of knowledge of facts on the ground that are available to anyone who cares, and who get their basic facts about a pandemic from TV talk shows and a prevailing media ethos that has no basis in reality.

How did we end up here? We need the answers to this question. Certain issues should be absolutely off-limits to the courts. Those issues pertain to fundamental questions concerning science and its application to human health. Of all things that need to be outside the realm of politics and the courts, it is these. The courts lack the competence. Even if the decision goes the right way, there is no real basis for feeling relieved and secure about our future.

Liberty can win this one and lose the next one. It all depends on the court appointments. This is not how a social order can operate. We need a system in which foundational issues of health, science, and liberty are outside the scope of the court system.

I wish I knew how to get there. We’ve been on a very long trajectory in which government exercises ever more control over our lives, inch by inch, for the better part of a century. We’ve come to the point where this control is a severe threat to our capacity to live free and dignified lives without being subject to the arbitrary whims of “experts” with power.

The courts have been too acquiescent for too long. If we had a really functioning court system and a Constitution that it followed, the forced closures of March 2020 would have been struck down in hours and ruled out as incompatible with freedom itself.

My highest hope is that the majority opinion here, if it goes the right way, won’t be narrow and evasive, picking apart the mandate based on technicalities, but sweeping and fundamental. It should say in no uncertain terms that this mandate should never have been issued and that the court should never have to intervene in such matters in the future.

Freedom requires at least the presumption that businesses (and all institutions) can operate without acting as proxies for the federal health police—pushing injections on their workers against their will—and that workers have the right to determine what medicines they will and will not take.

The very existence of this case in the Supreme Court reveals that something is fundamentally broken about our presumptions about the relationship between the individual and the state. It must be fixed. It won’t finally be fixed by a court but rather a dramatic cultural change that embraces certain fundamental propositions about liberty itself. We’ve played too many games and taken too many risks for too long.

Let us hope that this case awakens a culture and a world to a desperate need for dramatic reform. Human rights and public health are too important to be left in the hands of high courts.