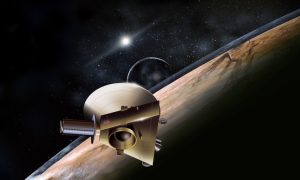 Get Ready for New Horizons’s Flyby of Pluto

NASA’s New Horizons spacecraft will fly through the Pluto system on July 14 at an angle of 46 degrees to the plane of the dwarf planet’s orbit, piercing the plane and then passing through the shadows first of Pluto and then of its moon, Charon.

Once past Charon it will turn around and, looking backward, search for any tenuous rings around Pluto and use sunlight reflected from Charon to image the part of Pluto’s surface now in continuous darkness.

Commentary from Bill McKinnon, a planetary scientist at Washington University in St. Louis and a co-investigator on the mission’s science team, will appear on the the New Horizons page curated by NASA’s Jet Propulsion Laboratory. Images will typically appear on the page one to a few days after the event.

All through June, New Horizons will be scanning its planned trajectory for debris that might damage the spacecraft. If any hazards are found, it might divert to an alternative pathway or point its antenna in the ram direction to shield the body of the spacecraft.

Already the images of Pluto are sharper than the best that can be made with earth-based telescopes.

The spacecraft will send down particularly choice images and other data July 12, two days before the day of closest approach, and again on July 13. This is a fail-safe or contingency sample, much like the bag of rocks Neil Armstrong scooped up in his first four minutes on the moon to make sure he wouldn’t come back empty-handed.

On July 14, the day of closest approach, the spacecraft will be incommunicado, busy executing a preprogrammed sequence of observations.

At 9 p.m. EDT on July 14 the spacecraft will phone home to let the team know it all worked.

It will then begin to return encounter images and other data, starting early in the morning of July 15. Following this, the spacecraft will download a complete but highly compressed “browse dataset” of the observations made during the flyby, so the mission scientists can get some idea of what it has captured.

Transmitting the full, uncompressed dataset will take time, however. McKinnon doesn’t anticipate seeing the first good stereo images that will make the topography look three-dimensional until September, and it will take a full 16 months to transmit all of the data. Pluto is very far away, so the radio signals are quite faint and the baud rates (referring to the number of signal or symbol changes that occur per second) quite low.

Back When Pluto Was Called a Planet

When New Horizons was launched in 2001, Pluto was still called a planet and Charon was Pluto’s only known moon.

In the 9.5 years the spacecraft has been traveling the 3 billion miles from Earth to Pluto’s perch at the edge of the solar system, everything has changed. The Hubble Telescope found two more moons, Nix and Hydra, in 2005; a group of astronomers reclassified Pluto as a dwarf planet in 2006; Hubble found a third moon, named Kerberos in 2011; and then a fourth, named Styx, in 2012.

From another point of view, however, nothing has changed. Pluto is still the most distant solar system body we’ve ever visited, and one about which we know very little. Watching it turn from a pixelated blob into a real world will be a thrill, says McKinnon.

New Horizons is the culmination of years of planning and lobbying for a mission to Pluto. The first proposal, called Pluto-350, was circulated in 1989. It was followed by Mariner Mark II, Pluto Fast Flyby, Pluto Express, and Pluto Kuiper Express, none of which made it off the drawing board. After a call for proposals, NASA finally selected New Horizons for funding in 2001.

McKinnon has to pinch himself to make sure he isn’t dreaming and that he is going to get to see Pluto up close.

Having read The Experts Speak, a giant compendium of predictions by experts that turned out to be wrong, McKinnon is a bit skittish about predicting what Pluto will be like.

Still, he expects its geology to be spectacular. At 4.7 billion miles from the sun, Kuiper Belt Objects are the coldest objects in the solar system. Pluto’s surface temperature is 40 Kelvin, or roughly -400 degrees Fahrenheit, and at that temperature many compounds that are gases on Earth freeze out as ices.

“There could be mountains of water ice with glaciers of nitrogen creeping down their sides,” McKinnon says. “That’s entirely plausible. At -400 degrees Fahrenheit, water ice would be hard and brittle, but nitrogen ice would be squishy and easily melted.”

“We know Pluto has atmosphere, or at least an atmospheric haze,” he says. It’s made up mostly of nitrogen, like Earth’s atmosphere, with traces of carbon monoxide and methane (natural gas). These ‘volatiles’ snow out of the atmosphere in some places and vaporize in others, creating shifting patterns of color and brightness on Pluto’s surface.

Pluto also has seasons; in fact, it has extreme seasons because it orbits tipped on its side. At its solstices (when the sun is at its highest or lowest in the sky), a quarter of its surface is in continuous daylight and another quarter is in continuous darkness.

While the New Horizons spacecraft has been in transit to Pluto, Pluto’s atmospheric pressure has doubled or tripled. But at the same time, McKinnon says, we know some of its atmosphere is escaping to space and mixing with the solar wind.

What replenishes the atmosphere if it is continually lost? “There is either a really thick layer of ice that hasn’t yet been depleted or a source of continuous supply,” McKinnon says. “And that’s something we’ll actually get to the bottom of when we get there, because there will either be thick ice caps that would take billions of years to erode or just a thin glaze of ices that must be replenished from somewhere.”

“We also want to understand as much as we can what lies beneath the surface,” McKinnon says. “Even though Pluto’s surface is icy, we think it has a rocky core. It may even have a subsurface ocean of water spiked with ammonia that is warmed by radioactive decay in the rocky core.”

New Horizons will also look at Charon and Pluto’s other moons. Charon seems to be very different from Pluto; its surface is covered by patches of ammonia hydrates and water crystals, which couldn’t long withstand bombardment with ultraviolet radiation and cosmic rays. Some scientists have suggested this may mean it is being resurfaced by icy lava flows from cryo-volcanos erupting liquid water with dissolved ammonia (like cosmic Windex), McKinnon says.