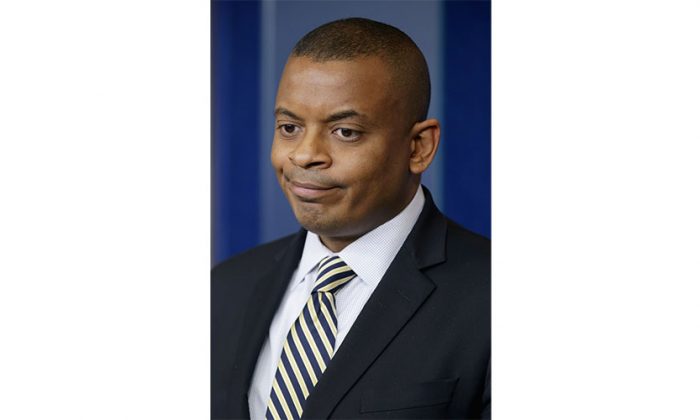 Transportation Secretary Anthony Foxx briefs reporters at the White House on May 12, 2014. Foxx said the Highway Trust fund will run out of money in August and could cost 700,000 jobs, creating 'the most dire moment' for the American transportation system in decades. (Chip Somodevilla/Getty Images)
Opinion

Get Ready for More of the Same on Capitol Hill

I felt a brief surge of hope about Congress a few weeks ago. It was returning from Easter recess, and Capitol Hill was filled with talk about immigration reform, a minimum-wage bill, a spending bill to keep the government operating, and maybe even funding for transportation infrastructure. But, as I said, it was brief.

That’s because the talk turned out to be just that. Immigration reform appears headed nowhere. Likewise, tax reform and budgetary discipline. The minimum-wage increase died in the Senate. Shoring up the Highway Trust Fund, which could go bankrupt at the end of the summer, requires either massive new spending or a hefty rise in the gasoline tax—and Congress, of course, is inclined to do neither. The one step it appears ready to take is to approve a short-term spending bill, and that’s only because no one in either party wants to risk the public outrage that would attend a government shutdown right before an election.

Which is part of the problem. With this year’s congressional elections fast approaching, neither party wants to force its members into tough votes. In fact, neither party even wants to appear to be working with the other one. Republicans in the House talk about Benghazi, boosting charter schools, and Obamacare, and pass bills that have no chance of becoming law. In the Senate, Democrats push an extension of jobless benefits, try to make political hay out of the Republicans’ rejection of the minimum wage, and show little interest in moving bills through to enactment. Listening to them separately, it’s hard to imagine that they inhabit the same country.

This doesn’t seem likely to change as a result of the mid-term elections. Congress will remain evenly divided. Which means that for the next two years at least, the stalemate between Capitol Hill and the White House will probably continue.

As a nation, we face a lot of challenges, yet we’re not addressing them. Comprehensive immigration reform may be “very difficult to achieve,” in the words of one leading Republican senator, but it’s still vitally important. Housing reform, tax reform, trade liberalization, reforming the International Monetary Fund—all need congressional action. So do the nation’s armed services and the Defense Department, which face serious cuts because of sequestration. Climate change isn’t even on the congressional agenda.

Which is why we have the curious sight of local governments trying to deal with a global issue by passing zoning laws and ordinances, in the belief that at least they can do a little bit to address climate change’s impact. Indeed, congressional inaction is spurring states to cancel planned summer bridge- and road-repair projects, and big-city mayors to fill the national power vacuum by going ahead with their own minimum-wage measures, tax increases, and other initiatives designed to legislate where Congress won’t.

Recently, I’ve been listening to what non-incumbent candidates for Congress are saying. Their partisan labels and policy specifics might differ, but not their basic message: that they’re the ones to fix congressional dysfunction, partisanship, and polarization, and to get Capitol Hill moving again. Many of them won’t get the chance to put their ideas into action, since incumbents have overwhelming advantages at election time. Even those who do get elected will find, as they always do, that there’s a yawning gap between what seems possible when you’re campaigning and what’s actually possible once you’re elected.

Still, the fact that candidates are talking about fixing Congress means they believe this is what Americans want. If they do well enough in the elections, perhaps incumbent members will notice that the people want Congress to get its act together, and to begin to address seriously our long list of problems.

Let’s hope so, because here’s my fear. Congress is already derided at home as bumbling and ineffective. The perception abroad is even more worrisome: Capitol Hill’s inability to act is seen as a key piece of America’s decline as a superpower. If it turns out that we’ve got several more years of drift and dysfunction ahead of us, then the institution that our founders considered to be the keystone of American democracy risks becoming not part of the solution, but the core of the problem.