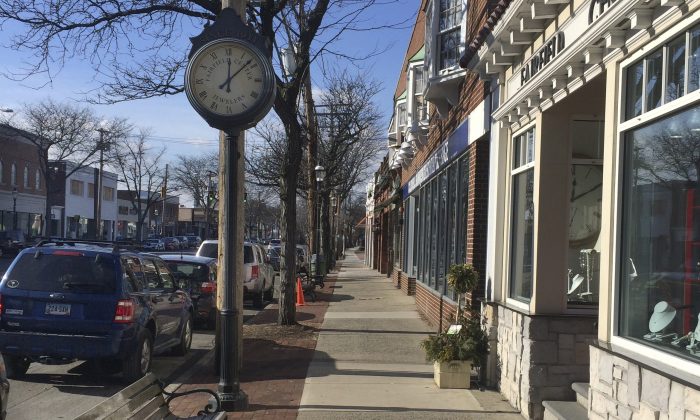 The sun shines on shops along Post Road in Fairfield, Conn., on Jan. 14, 2016. General Electric said Wednesday it will begin relocating its global headquarters from its suburban campus in Fairfield to Boston in the summer, and complete the move by 2018. General Electric’s relocation has many in Fairfield fretting over the loss of tax revenue, charitable spending, and the prestige that comes with being home to a $130 billion company. (AP Photo/Michael Melia)
US

FAIRFIELD, Conn.—It’s not just the loss of loyal customers that worries jeweler Howard Diamond, or the extra tax burden that businesses like his may have to carry as General Electric pulls the plug on Fairfield. As he approaches retirement and thinks about selling his home in town, he also fears an exodus of GE employees driving down real estate values.

With average household incomes far exceeding $100,000, Fairfield has enough going for it to weather the change. But GE’s departure has many in the town of 60,000 people and other nearby shoreline communities fretting over the loss of revenue, charitable spending, and the prestige that comes with being home to a storied, $130 billion company.

GE announced this week it will move its global headquarters to Boston and leave behind its sprawling campus in a rural area of Fairfield, where it employs 800 people. The move is expected to occur in stages and be completed in 2018.

The company is the town’s biggest payer of property taxes, at $1.6 million annually, and the income tax on company salaries boosts towns up and down Connecticut’s Gold Coast. But Fairfield First Selectman Michael Tetreau said the impact goes deeper.

“It’s definitely a hit on our community. Not just the economy, but the community,” said Tetreau, who counts friends among the GE employees. “These are people who have been very involved.”

It’s definitely a hit on our community. Not just the economy, but the community.
— Michael Tetreau, Fairfield first selectman

GE employees hold seats on boards of charities across Fairfield County, and the GE Foundation has given millions to local schools and other causes. After the 2012 Sandy Hook Elementary School massacre in nearby Newtown, GE lent the services of several executives to help the town manage the aftermath and gave a $15 million gift.

Tetreau plans to meet next week with GE to discuss how to minimize the impact on Fairfield. There is hope another large employer will eventually buy the GE property. To overcome the blow to Fairfield’s image in the meantime, he said he expects the town will also mount a campaign to emphasize the town’s benefits, including strong schools for employees with families.

Several people interviewed in town had angry words for elected leaders, looking to cast blame. It was dissatisfaction with proposed state business taxes that led GE to announce in June that it was exploring a move, although the company said this week that it began evaluating its headquarters location three years ago.

Candace Adams, president of Berkshire Hathaway Services New England, said she expects houses that come onto the market will be absorbed without major disruptions. The biggest hit, she said, is likely be the psychological impact on buyers in a region where GE has been part of the civic fabric so long.

Diamond, the jeweler, said Fairfield will be fine in the long run. In 1974, when his uncle was among the business leaders involved in the push to bring GE from New York City, he said the big concern was traffic. Nobody talks about that anymore, and he said the town will adapt to this, too.

“There will be an adjustment period,” he said.