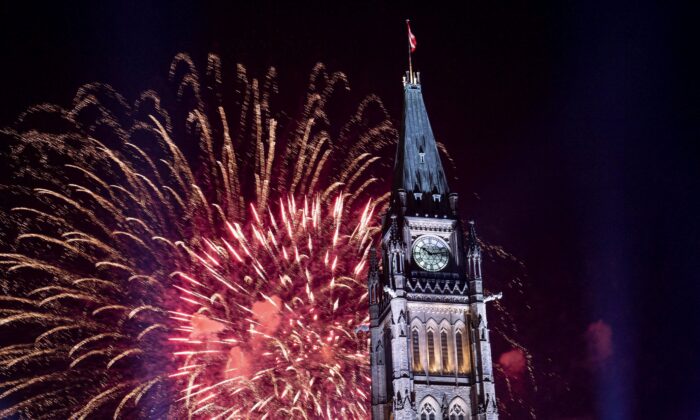 Fireworks explode over the Peace Tower on Parliament Hill at the end of Canada Day celebrations in Ottawa on July 1, 2018. (The Canadian Press/Justin Tang)
Viewpoints

Gerry Bowler: What I Want for Canada Day

I used to think it was a pretty good thing to be a Canadian.

I could see that I lived in a free country, relatively free of violence. The people were prosperous but full of community spirit and charitable to those less well off. We weren’t the kind of country that picked fights but we behaved bravely and nobly when the bad guys stepped out of line. We dealt with the Kaiser’s armies, fascist stormtroopers, North Koreans, Red Chinese, and jihadis but quickly dismantled our armed forces after every war.

Our heroes were plentiful and varied—people such as Terry Fox, Wayne Gretzky, Rocket Richard, Rick Hansen, Laura Secord, Leonard Cohen, and Mr. Dressup.  Our “Greatest Canadian” was a bespectacled Baptist preacher-turned-populist who pioneered Medicare. One of us invented basketball. Others invented peanut butter, the paint roller, the zipper, butter tarts, radio, and the electric wheelchair. We all knew that Canadians discovered insulin, and that the Robertson screw was as vastly superior to the Philips head as CFL football was to the snooze-fest that is the NFL. Instant replay? That was us. The Ebola vaccine? Canadians did that. Garbage bags, canola, newsprint, snowmobiles, the Canadarm? Ditto.

Whenever I travelled I knew that being a Canadian was an enviable thing. I could tell that from seeing all the American tourists with maple leaf flags sewn on their backpacks. Foreigners knew about our generous attitude to immigrants and refugees, and wanted to talk about how they could become one of us too.

I was not unaware that Canadians occasionally screw up. We don’t always get things right—our health-care waiting times are far too long, we were the first people to put pineapple on pizza, and highly paid executives at the CBC honestly believed that “Little Mosque on the Prairie” was funny—but generally I thought that being a Canadian was something to be proud of.

But then things changed.

Our politicians started telling us about all the things that we ought to be ashamed of as a nation. Apologies for misdeeds came fast and furious, usually for long-ago actions in which no living Canadian or their grandparents had had a hand. Leaders clutching teddy bears told us with tear-filled eyes that our government and churches had perpetrated genocide. We, who live in one of the most congenial and least racist countries on the planet, were informed that we bore the indelible mark of systemic racism on our brows. Flags were lowered to half mast.

A war was waged on our national past. Museums purged exhibits of our colonial and pioneer heritage. Figures of enormous historical importance were erased from public memory. The man chiefly responsible for establishing Canada and the man who set up free public education had their names removed from institutions and their images draped in tarpaulins. Mobs tore down statues while police stood idly by.

Canadians began to notice that people were not being treated equally and that there were favoured categories, winners and losers, based not on character or accomplishment but on essential markers over which one had no control. Gender, sex, and race were now openly factors in hiring or in establishing the authority to speak on certain topics. Job applicants and authors found it helpful to construct a false racial background for themselves. Masculinity was now considered toxic.

In this campaign against our sense of pride in being Canadian, is it any wonder that Quebec separatism has revived or that there are increasingly loud voices in the West for prairie sovereignty?

Now we approach July 1, the day set aside to celebrate Canada and, to no one’s surprise, Winnipeggers learn that there are to be no jubilatory fireworks as has been traditional at The Forks heritage site. Instead, we will “acknowledge the anger and hurt indigenous communities are feeling” and spend the day hearing stories and building understanding. That sounds like great fun and is sure to attract a large and happy crowd.

Do you know what I would like to see for Canada Day? I would like to experience an entire day without an apology from a politician for my country’s actions. I want our museums to stay open and to tell the truth about John A. Macdonald, Egerton Ryerson, and Lord Amherst. I would like to see broadcasters fill the airwaves with tales about our glorious past, splendid present, and sparkling future. I want to hear stories from our elders about how they spent their lives building all the things that make Canada the place that millions of people around the world would love to migrate to. I want our kids to experience a single day of pride, free from the message that they live in a racist genocidal hellhole of which they ought to be ashamed.

And fireworks. I want fireworks too.

Gerry Bowler
Follow
Gerry Bowler is a Canadian historian specializing in the intersection of religion and popular culture.