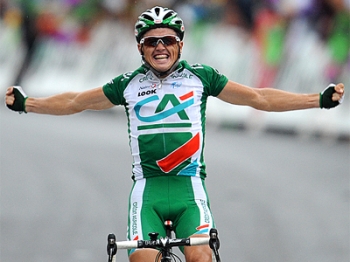 2006 Tour champion Oscar Pereiro receives medical assistance, after he toppled over a guardrail (above) descending the Col Agnel during Stage Fifteen of the 2008 Tour de France. (Joel Saget/AFP/Getty Images)
News

The real race was behind the leaders, as Cadel Evans, Frank Schleck and Christian Vande Velde fought for the yellow jersey and standing in the general classification.

At the end of the day, Frank Schleck had the yellow jersey and overall lead, Cadel Evans dropped to third, and Christian Vande Velde dropped to fifth, with a rest day and then two more brutal mountain climbs ahead.

Stage Fifteen was one for the climbers: starting in Embrun, the first fifteen km of the 183 km stage were fairly level; the next fifty-four climbed up to the huge 2744 meter Hors Categorie Col d’Agnel. The next 54 km were a steep and dangerous descent, followed by fifty km of relatively level road, with a short steep Cat Three climb and then a twisting 20 km Cat One climb to a mountaintop finish in the Alpine skiing town of Prato Nevoso.

Overall leader Cadel Evans described the end of the stage: “I know the climb to the finish in Prato Nevoso. It’s hard … but I think we’ll see a group of riders arrive at the finish together.” Evans led the field by a single second, a lead he had maintained since Stage Ten.

Team Columbia sprinter a four-Stage winner Mark Cavendish dropped from the Tour overnight, probably saving himself for the upcoming Olympics.

The stage started in terrible conditions, cold and rainy, making the climbing that much more unpleasant and the descent hugely more dangerous.

Ups and Downs of the Col Agnel

The first effective attack of the stage came from Egoi Martinez (Euskatel Euskadie), Jose Luis Arrieta (AG2R), and Danny Pate (Garmin Chipotle), joined after a few km by Simon Gerrans (Credit Agricole). This group opened a three-minute lead by the start of the climb proper.

The lead group of four crested the peak 13 minutes ahead of the peloton. Many riders felloff the back in the final five kilometers of the first climb. Quick Step rider Stijn Devolder dropped out of the race entirely, too exhausted to continue.

The rain stopped as the climb started, but the temperature dropped to 48 degrees F. As the peloton crested the peak, the rain started up again. The descent was very treacherous, as the pavement was new and very smooth, and with the light rain, was exceptionally slippery.

Oscar Pereiro (Caisse D’Epargne) and Robert Hunter (Barloworld) collided on the descent and hit a guardrail. Pereiro went over the guardrail and fell down to the road on the switchback below. Pereiro fractured his shoulder and leg.

Silence-Lotto and Lampre led the peloton but didn’t try to catch the leaders, who had a 17-minute lead by the 115 km mark. At the 125 km mark, Lampre was given team orders to chase down the lead group. CSC took over next, driving the pace even harder.

Fifty km out, there was a major crash at a large roundabout, or rather two crashes, as riders crashed in two distinct groups.

Riders split up circle a large island in the road, and dozens of riders went down. The a rider slid in the left hand group, taking a dozen riders with him, then on the right, possibly because riders were reacting to the crash, a chain collision occurred.

In a bit of sportsmanship, the peloton slowed to allow the downed riders to remount and rejoin, instead of taking advantage of their misfortune.