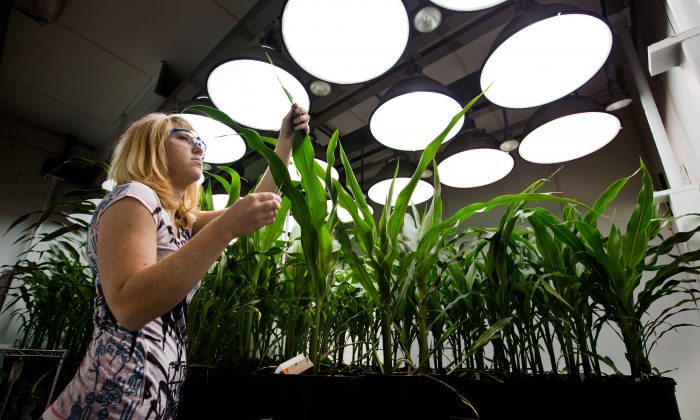 An article in state-owned People’s Daily on Oct. 7 defined the new crop seed varieties, granted with property rights, based on germplasm resources, as a “chip” in the modern agriculture field, and emphasized the importance of such resources.

The article author, Liu Xu, a member of the Chinese Academy of Engineering and former vice principal of the Academy of Agricultural Sciences, defined “germplasm resources” as biological carriers with exploitable value, involving living individuals and groups and even DNA and genes.

The article quoted a February document by the central committee of the Chinese Communist Party (CCP) that said,  “seeds are the foundation for the modernization of agriculture” and “fight for turn-over of the seed industry,” indicating an end to the long-standing limitation of intellectual property rights in the seed industry.

Shi Shan, a senior media worker who focuses on Chinese political and economic issues who lives in the United States, said this is the first time the CCP authorities have singled out the seed industry issue in a “Party core document.”

Liu Xu also admitted that the process of generating new germplasm through independent innovation and then owning intellectual property rights takes 15 to 30 years and requires a lot of financial resources, energy, and time.

China’s largest and most extensive census of agricultural germplasm resources started in 2021 and will continue to 2023. After the CCP completes the state-level database, its seed resources reserve capacity will increase from 400,000 to 1.5 million copies, according to China’s official media.

However, the top 10 patent applications in China for biological breeding are from universities and research institutions, that, unlike international seed giants DuPont and Monsanto, can realize their patents into practical technologies and commercial applications.

Jing Fei, a professor at Bohai University’s Institute of Management, told Chinese media First Financial that the alliance between research institutions and enterprises in China is relatively lax and sloppy.

The seed industry’s gap between countries depends on whether the country can obtain gene patents with independent intellectual property rights, Jing said, “but at present, China is still using foreign patents or waiting for the first generation of patents to expire; meanwhile, western multinational enterprises have already developed more genes with commercial profits.”

Wan Jianmin, vice principal of the Chinese Academy of Agricultural Sciences, also admitted that in developed countries such as the United States and Europe, the seed industry has entered the era of “biotechnology + artificial intelligence + big data information technology” breeding, while China is still in the era of crossbreeding and molecular technology-assisted breeding.

To prevent Chinese seed companies from being impacted by multinational companies entering China and thus dominating the Chinese market, the CCP has introduced a series of restrictive measures. Moreover, as Jing said, the most effective way for the CCP to stave off the influence of foreign companies is to speed up the integration of Chinese-capital seed companies.

Jing suggested that the CCP integrate the market-oriented seed industry with the core of Syngenta Group, eventually launch a “Germplasm aircraft-carrier,” and catch seed security tightly in the hands of Chinese-capital seed enterprises.

In January 2020 ChemChina reorganized with another state-owned company Sinochem Group. Five months later (June) it further expanded to the Syngenta Group by combining with Syngenta and Israel-based Adama. According to NS Agriculture media.

Following this restructuring and integration, the Syngenta Group has wholly taken over Syngenta—the world’s No.1 crop protection maker and No. 3 seed supplier—and the merged company’s business activities sprawl over more than 100 countries and regions worldwide.

Chinese media reported on Sept. 22 that the restructured Syngenta Group will soon be listed on the Shanghai Stock Exchange, with proposed fundraising of $10.1 billion, a new record for sci-tech, and the largest A-share of Initial Public Offering (IPO) in China in the past 10 years.

China Is Still a Major Importer of Seeds

A Sept. 14 report by Beijing-based, pro-CCP media, Dwnews said that China imports practically all crop seeds, to varying degrees, except rice and wheat.

The most imported seeds China imports are for ryegrass and vegetables. Ryegrass, a favorite feed for domestic animals such as cattle and sheep, is 95 percent dependent on imports. A total of 13 percent of vegetable seeds are imported, including some common vegetables like leeks, cabbage, cucumbers, peppers, radishes, etc.

Potatoes and corn,  apples, citrus, grapes, and other fruit seedlings, also rely on imports, according to the report.

At the beginning of 2021, China’s taxation department dropped the tariff on seed imports that was part of the last five-year plan (2016-2020), saying the tariff adjustment was to serve the agriculture and forestry industry.

In May, the CCP leader Xi Jinping said during his visit to Henan Province that to ensure food security it is a must to keep the seeds firmly in hand.

On July 9, Xi emphasized again at a communist cadre meeting that China’s food security must be ensured by state-produced seeds, and it thus requires raising the security of seeds to the level of national security.

The meeting passed an action plan on building up a germplasm resource base, which aims to control seeds, said an official financial media.

At a Sept. 29 meeting of the CCP political committee, Xi once again stressed promoting the industrial application of biological breeding fields.

Shi Shan said the CCP’s authorities have been concerned about the seed issue since the seed planting season until now, when the main grain harvest is almost complete, “which probably reveals that the results [of seed security] did not meet [the CCP’s] expectation.”

Obviously, “China’s biological breeding industry will take more time to surpass that of western countries than the CCP expected, as their technology has been accumulated and developed for decades,” Shi said.