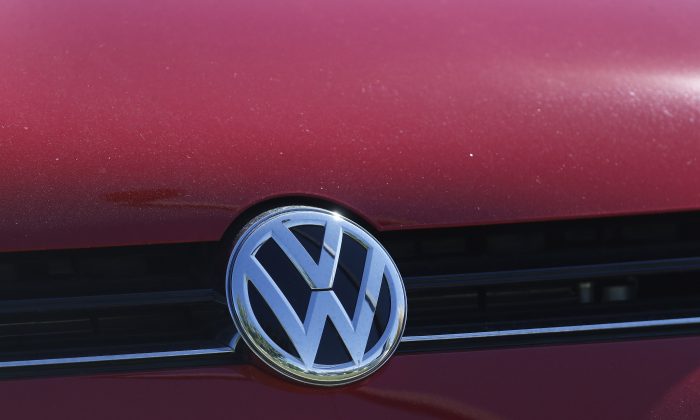 The grille of a Volkswagen is decorated with the iconic company logo on the lot of a VW dealership in Boulder, Colo., on Sept. 24, 2015. Shares in automaker Volkswagen are sliding after U.S. environmental officials said the company equipped more models than previously thought with software that let the cars cheat on diesel emissions tests. (AP Photo/Brennan Linsley)
Business & Markets

BERLIN—Germany’s Volkswagen, already reeling from the fallout of cheating on U.S. emissions tests for nitrogen oxide, said Tuesday that an internal investigation has revealed “unexplained inconsistencies” in the carbon dioxide emissions from 800,000 of its vehicles—a development it said could cost the company another 2 billion euros ($2.2 billion).

The investigation was undertaken by the company after the revelations that many of its vehicles had software that allowed them to deceive U.S. nitrogen oxide tests. CEO Matthias Mueller promised Tuesday that Volkswagen “will relentlessly and completely clarify what has happened.”

“It is a painful process, but for us there is no alternative,” said Mueller, who took over after CEO Martin Winterkorn resigned in September because of the emissions-rigging scandal. “For us, only one thing counts, and that is the truth.”

The news is the latest in a string of problems identified with Volkswagen emissions, which have caused share prices to plummet.

In September, the company admitted it had installed software designed to defeat tests for nitrogen oxide emissions for four-cylinder diesel engines on 11 million cars worldwide, including almost 500,000 in the U.S. It has already set aside 6.7 billion euros ($7.4 billion) to cover the costs of recalling those vehicles—and analysts expect the emissions scandal to cost the company much more than that.

That scandal had already widened this week, when the U.S. Environmental Protection Agency said Volkswagen had installed software on thousands of Audi, Porsche and VW cars with six-cylinder diesel engines that allowed them to emit fewer pollutants during tests than in real-world driving. Volkswagen has denied the charge, but faces the prospect of more fines and lost sales.

It was not immediately clear whether the 800,000 vehicles announced Tuesday with the newly discovered carbon dioxide emission problems were among those already affected. Volkswagen did not identify any models by name.

However, Jeannine Ginivan, spokeswoman for Volkswagen Group of America, said “we are told the issue is not related to the U.S. market.”

Volkswagen also did say the 800,000 were “predominantly vehicles with diesel engines,” raising the possibility for the first time that some Volkswagens with gasoline-powered motors may also have emissions problems. A VW spokesman did not immediately return a phone call seeking clarification about that.

Volkswagen’s board of directors said in a separate statement that they learned of the development “with dismay and concern.”

“The board of directors and the committee specially established to investigate will meet soon to discuss further measures and consequences,” the board said.

Despite the new issue, the company assured customers that the safety of the vehicles in question “is in no way compromised.”

It said Volkswagen “will endeavor to clarify the further course of action as quickly as possible and ensure the correct CO2 classification for the vehicles affected” with the responsible authorities.

In talks with the authorities—whom Volkswagen did not identify—the company said it hoped to come up with a “reliable assessment of the legal, and the subsequent economic consequences, of this not yet fully explained issue.”

The news broke after Germany’s DAX was closed for the day, but Volkswagen shares ended down 1.51 percent to 111 euros.