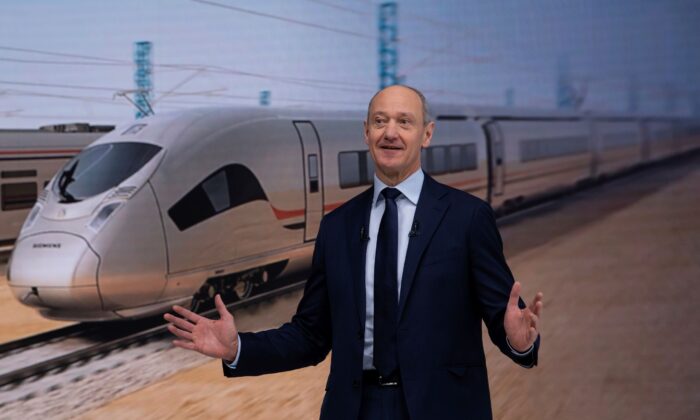 Roland Busch, President and CEO of Siemens AG talks on stage at the virtual Annual Shareholders' Meeting in Munich, Germany, on Feb. 10, 2022. (Sven Hoppe/Pool via AP)
Businesses in COVID-19

FRANKFURT, Germany—Germany Siemens AG, global maker of big-ticket machines and industrial equipment and software, saw net profit rise 20 percent to 1.8 billion euros in the last three months of 2021 as the rebounding global economy increased orders for its goods, including a 1-billion euro order for high speed trains in Germany.

The company on Thursday confirmed its outlook for increased earnings going forward and proposed an increased dividend of 4 euros per share for its last fiscal year, up from 3.50 euros in fiscal 2020.

CEO Roland Busch said the company had “a very successful start” in the October-December quarter, the first of its fiscal year. Siemens experienced what Busch called an “unprecedented boom” in new orders, which rose 52 percent from a year earlier.

It is a key figure for the company because orders for large-scale projects that may take months or years to complete underpin future earnings and reflect economic optimism and willingness to invest in the major markets of China, Europe, and the U.S.

Siemens’ outlook “is based on continuing healthy growth in global GDP, albeit with slowing momentum.” Its projects have faced hurdles from renewed COVID-19 outbreaks and supply chain delays like the rest of the global economy, but Siemens said it expects those challenges to ease this year.

The company saw strong results and orders from its factory automation and industrial software business, which turned in just under a billion euros in earnings, with a fat profit margin of 22 percent.

Siemens has pursued a strategy as a “focused technology company,” spinning off its less-profitable gas and power division and selling a stake in its medical equipment business, whose products include MRI imaging machines. It is moving to divest its stake in joint venture Valeo Siemens eAutomotive, which makes parts for battery and hybrid cars, and its post and parcel business Siemens Logistics.

Based in Munich, Siemens has 305,000 employees in more than 200 countries making trains, medical imaging devices, and factory automation systems.