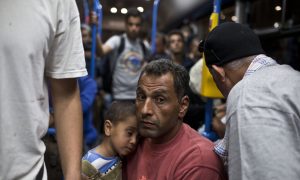 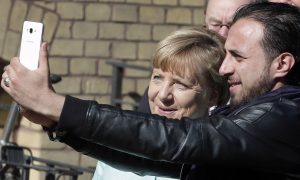 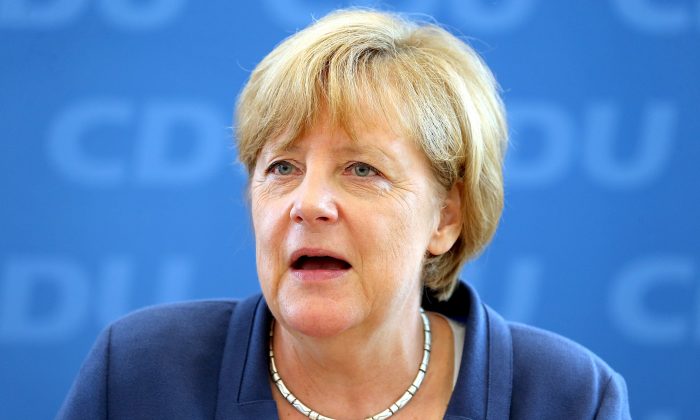 Germany’s Merkel Grapples With Strife at Home Over Migrants

BERLIN—German Chancellor Angela Merkel has been looking unusually vulnerable as she prepares to meet the world’s top leaders this week, struggling to slow a huge influx of migrants amid mounting demands to do just that.

Merkel’s optimistic signature phrase in the crisis — “We will manage it” — is wearing thin at home, bringing rare open criticism from her own conservative bloc. She has made little headway persuading Germany’s European Union partners to share the burden. Polls have shown her popularity sliding.

Over recent days, her governing coalition squabbled over a plan to give many Syrians a restricted asylum status that wouldn’t allow them to bring relatives to Germany for two years. The program was announced by the interior minister apparently behind the chancellery’s back, and quickly shelved, but then backed by prominent conservatives. The bickering came just after the government buried another weekslong argument.

However, while these are difficult times for Merkel, they are far from desperate. The chancellor appears to be inching toward more restrictive policies without dropping her broadly positive approach. She also needs to reconcile the interests of a governing coalition of right and left.

Over the years, her pragmatism at home and persistence abroad have left her without serious rivals as Germany’s and Europe’s most powerful politician. That makes her a key figure among leaders of the Group of 20 nations, who meet Sunday and Monday in Turkey.

Fellow conservatives appear to be trying to push her to the right, with Finance Minister Wolfgang Schaeuble — a heavyweight in her Christian Democratic Union — saying Sunday that “our capacity to take in (people) is not unlimited” and that it needs to be “clear in Syria that not everyone can now come to Germany.” On Wednesday, he compared the influx to a potential avalanche.

Still, there’s no sign of any direct attack on her position, and Merkel has a long record of patiently working through crises.

“This is not a power struggle” because there is no opponent, said Oskar Niedermayer, a political science professor at Berlin’s Free University. “There is no one who wants to damage her to the extent of running against her and really challenging her as party leader or chancellor.”

Her strength over a decade in power has been in improvising responses to confusing crises, giving Germans the reassuring sense that she’s in control.

But that sense — something that has earned her the nickname “Mutti,” or “mom” — has seemed in short supply lately as Germany struggles to stem the tide of refugees and other migrants. Merkel has said that she can’t just flip a switch to stop the flow, and even that it is “not in our power how many come to Germany.”

While Merkel has repeatedly stressed that people who have no claim to asylum must leave Germany quickly, she so far has ignored pressure to state clearly that there is a limit to the number of refugees Germany can take in — apparently wary of making promises she can’t keep.

Merkel, the daughter of a Protestant pastor who grew up behind communist East Germany’s fortified border, has appeared driven by a mixture of her trademark pragmatism and moral purpose. She argues that it’s not feasible to seal off Germany or Europe in the Internet age.

As the head of a party with “Christian” in its name, Merkel said last month, “I don’t want to get into a competition to see who in Europe treats in the least friendly way people… who have come 2,000 kilometers to us.”

All the same, Niedermayer noted that “the unlimited ‘culture of welcome’ of the early days already doesn’t exist,” pointing to moves by the government to make it easier to send home people from Balkan countries such as Albania and Kosovo, among others. Officials also have made clear that not all newcomers from Afghanistan will be allowed to stay.

This week, Interior Minister Thomas de Maiziere said he had reversed a decision from August, which had effectively meant Syrians wouldn’t be sent back to the first EU country where they were registered, as EU rules stipulate.

Merkel: No Need for New Taxes to Pay for Care of Migrants

The practical impact appears negligible, given that most haven’t been registered by other countries they crossed, but the move sends a signal — though government spokeswoman Christiane Wirtz denied any change in “political direction.”

Satisfaction with Merkel has declined from a stellar 75 percent in April to a still-respectable 49 percent this month, according to polling by the Infratest dimap agency for ARD television, while support for Merkel’s conservative bloc slipped from 41 percent to 37 percent.

While her third term was smooth until this summer, Merkel has been in worse poll positions before — notably during her 2009-2013 second term, which was marred by near-constant cacophony and feuding in the center-right coalition she ran then.

One factor that didn’t help in the short term was her abrupt decision in 2011 to speed up the closure of Germany’s nuclear power stations, viewed by many as undermining her credibility.

On refugees, “I don’t think she can change her basic position — that would be seen as opportunistic again,” said Manfred Guellner, the head of the Forsa polling agency. “What she can do, and what she apparently is doing, is take small steps to ratchet up (policy) without her basic position being affected.”

Guellner noted that “many people haven’t seen any refugees” so far, meaning that “at the moment, it’s something abstract for most people.”

“It is not the case that Germans are turning away from Merkel now,” Niedermayer said. But he conceded that, if her image as a reliable crisis manager takes long-term damage, “that will be dangerous.”