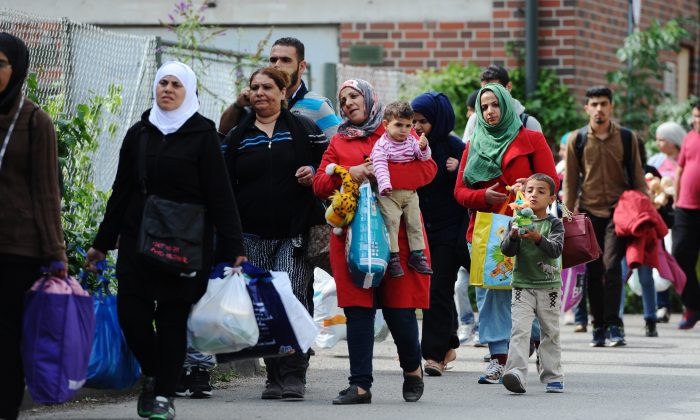 Migrants and refugees arrive at a tent village at the Donnersberg bridge close to the central train station in Munich, Germany, Sunday Sept. 13, 2015 . (Andreas Gebert/dpa via AP)
Europe

BERLIN— Germany announced Sunday that it was introducing temporary border checks on the Austrian frontier in a bid to limit the influx of refugees, and cross-border train services from Austria were suspended.

Germany and Austria agreed over a week ago to let in migrants who had gathered in Hungary, saying it was a one-time measure to ease an emergency. The influx has continued and, while Germans have remained welcoming, officials said over the weekend that the speed of the arrivals was straining the country’s ability to provide accommodation.

“This step has become necessary,” Interior Minister Thomas de Maiziere told reporters in Berlin. “The great readiness to help that Germany has shown in recent weeks … must not be overstretched.”

Germany has called, so far with little success, for other countries in the 28-nation European Union to share the burden of taking in people seeking refuge. Its move came a day before a meeting of EU interior ministers, and de Maiziere said it was “also a signal to Europe: Germany is facing up to its humanitarian responsibility, but the burdens connected with the large number of refugees must be distributed in solidarity within Europe.”

De Maiziere didn’t specify how long the border controls would remain in place or give details of exactly how incoming migrants would be handled. He said there could be disruption to rail travel. Most migrants have been arriving by train.

Germany’s national railway, Deutsche Bahn, said it had halted service between Austria and Germany for 12 hours at authorities’ orders.

De Maiziere said Germany was reintroducing checks at its borders with an “emphasis” on the Austrian border; it wasn’t clear whether checks would be stepped up at other borders. The rules of Europe’s passport-free travel zone, known as the Schengen area, allow countries to reintroduce controls in exceptional circumstances, and the European Commission said that “the current situation in Germany … appears to be a situation covered by the rules.”

Hungarian police say more than 186,000 people have passed through Hungary from Serbia this year en route to Austria and the migrants’ major destination, Germany, which says it has taken in more than 50,000 newcomers in the past week alone.

Also on Sunday, at least 34 people seeking a better life in Europe drowned as they attempted a wind-swept crossing from Turkey to Greece, a journey often made more dangerous because smugglers require asylum seekers to pilot the overloaded craft themselves in choppy seas.

Greece’s coast guard said the dead, including four infants and 11 older children, drowned when their wooden boat containing more than 130 people capsized near Farmakonissi. The island lies midway between Samos and Kos, two of the favored targets for smugglers sending thousands daily to Greek islands off Turkey’s coast. Smugglers typically stay behind to avoid arrest in Greece.

Coast guard officials said the boat may have tipped over in part because of wind gusts exceeding 50 kph (30 mph).

Rescue officials said 68 others were rescued from the sea while 30 more swam to the barely populated island. They said the survivors and the body of one child were taken to the nearby larger island of Leros. The other dead were taken aboard a Greek navy gunboat and a coast guard vessel bound for Rhodes, which has autopsy facilities.

On Saturday, two other boats carrying asylum seekers capsized in the Aegean and at least five people — four children and a 20-year-old man — were presumed drowned. The coast guard said they still were searching for those bodies.

Such risks have not deterred scores of boats to make the crossing daily to Greece’s eastern islands, from where migrants pursue a more than 1,000-mile (1,600-kilometer) odyssey to the heart of the European Union via the Balkans and Hungary, where authorities have vowed to fortify their southern frontier and prosecute those who try to evade border police.

Hungarian army engineers spent Sunday expanding the country’s planned 174-kilometer (109-mile) border fence with Serbia and crowning it with coils of razor wire as the government warned that, from Tuesday onward, any asylum seekers caught breaking through the barrier would be arrested and charged with a criminal offense.

Police said 4,330 were detected crossing on foot in the previous 24 hours, more than 700 higher than the previous one-day record, as trekkers strove to reach Hungary before the tougher security measures take effect.

Hungary’s lawmakers have not voted yet on whether to back government plans to deploy more than 3,000 troops in support of border police, but dozens of soldiers already were patrolling the fence Sunday. Some drove along the dirt track beside the fence in jeeps while others patrolled on foot with attack dogs. While many migrants viewed the military presence with suspicion, they were able to walk through a gap in the fence without being challenged. All soldiers appeared to be armed with assault rifles.