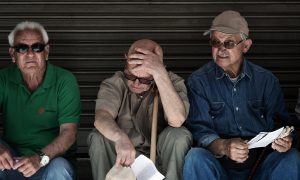 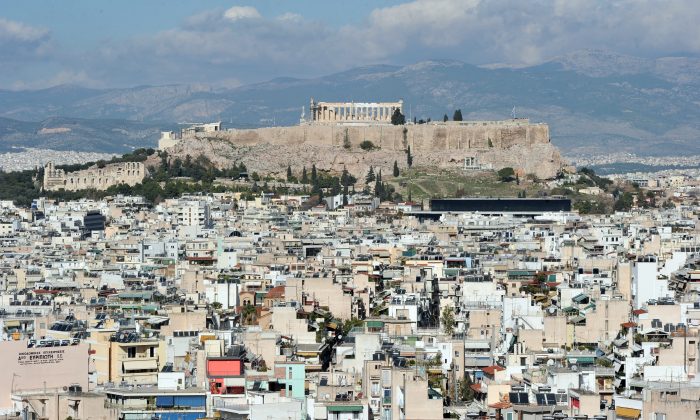 A view of Greece’s capital, Athens, with the acropolis hill in the background, on Nov. 28, 2013. (Louisa Gouliamaki/AFP/Getty Images)
Opinion

As Greeks suffer in multiple ways the effects of the economic crisis their country is going through, Germany has profited handsomely from the Greek crisis. This is a conclusion of research carried out by the Halle Institute for Economic Research (IWH). The study shows that the Greek debt crisis resulted in a reduction in German bund rates of about 300 basis points (BP). This led to interest savings of more than 100 billion euros ($1.10 billion) (equivalent to more than 3 percent of gross domestic product (GDP) during the period 2010 to 2015.

According to the study, Germany would still benefit if Greece defaults on all its debt. The savings would still be substantial if Greece does pay or pays at least in part. This is the result of investors’ increased demand for German bonds because of the greater safety they provide. Many investors would lend money to the German government at extremely low rates rather than risk losses on higher return enterprises.

Greece missed two key payments to the International Monetary Fund (IMF) in June and July, and the terms for a third bailout need to be reached by Aug. 20. On that date, Greece’s next debt repayment to the European Central Bank is due. Although Greek officials were optimistic about the results of the negotiations, German officials were more cautious. Steffen Seibert, Chancellor Angela Merkel’s spokesman, said that “thoroughness comes before speed.”

Greece asked for its first bailout in 2010, and Germany provided the funds for the following five years either directly or through the IMF or the European Stability Mechanism.

While German officials want Greece to implement credible pension reforms and privatization plans, the Athens government is desperately trying to find funds to recapitalize the country’s ailing banks. However, any deal will have to be ratified by German MPs, many of whom oppose further concessions to the Syriza government.

Unlike other European countries, the German economy is still expected to grow in 2015.

In the meantime, the bailout money Greece has received so far hasn’t made its way into the economy but rather it has gone to pay off the country’s international loans. The government cannot begin to pay down its enormous debt load unless a recovery takes hold. In practical terms, something has to give and the indications are that unless most of Greece’s debt is written off, we will see the same scenario repeated in a short time.

It is estimated that more than 65,000 small-size enterprises have closed since 2010, leading to the unemployment of thousands, homelessness, and a dramatic increase in suicides.

A great number of small-size enterprises have suffered the consequences of declining consumption, lack of liquidity, and emergency taxes. It is estimated that more than 65,000 of them have closed since 2010, leading to the unemployment of thousands of people. A new generation of “neo-homeless” now exists, some of whom are people of high educational backgrounds who are unable to cope with the crisis.

It is not surprising that suicides have increased dramatically, while many psychiatric clinics have had to close down at a time when they are most needed. A similar situation has risen as a result of the increasing number of HIV infected people, probably the result of increased drug addiction and use of contaminated needles, while drug prevention centers continue to close down.

There is something incongruous where one of the richest countries in the world continues to profit from the miseries of a poor country like Greece. To pretend that Greece will be revived by a new influx of predatory loans is to pretend that a terminally sick patient will be cured by a blood transfusion.

Dr. César Chelala is an international public health consultant for several organizations. He is also a winner of an Overseas Press Club of America award.