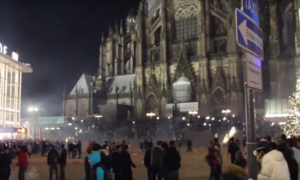 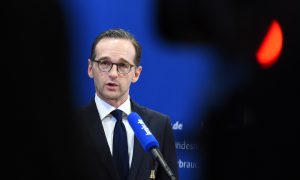 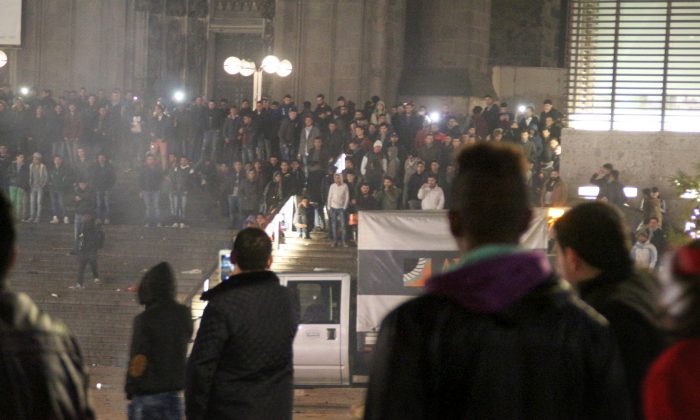 Persons gather at the Cologne, Germany, main station on Dec. 31, 2015. German police said Jan. 6, 2016, that they are investigating whether a string of sexual assaults and thefts at New Year is linked to a known criminal network. The assaults in Cologne last week have prompted outrage in Germany and a fresh debate about immigration, after police said the perpetrators appeared to be of "Arab or North African origin." The events in Cologne involved a crowd of around a thousand men. Police say at least 90 criminal complaints were filed, and that some men in the crowd formed smaller groups and surrounded women. (Markus Boehm/dpa via AP)
Europe

COLOGNE, Germany—More women came forward Wednesday alleging they were sexually assaulted and robbed during New Year’s Eve celebrations in the German city of Cologne, as police faced mounting criticism for their handling of the incident.

At least 106 criminal complaints have been filed since last week, Cologne police spokesman Christoph Gilles said. The figure has increased from 90 since Tuesday.

“At least three quarters have a sexual component. In two cases we are investigating crimes that amount to rape,” Gilles told The Associated Press.

About 1,000 men described by police as being of “Arab or North African origin” gathered around Cologne’s main station, next to the city’s famous cathedral, on the night from Thursday to Friday. Smaller groups then surrounded individual women, harassed them and stole their belongings.

Police initially failed to mention the assaults in report the following morning, describing the festivities as “largely peaceful.”

Details of the attacks only emerged over the weekend and calls have grown for a comprehensive review of police actions on the night, after some witnesses claimed that officers didn’t stop the attackers.

Gilles said police were well prepared on the night, but “surprised” by the scale and aggression of the attacks.

Mayor Henriette Reker said she expected police to analyze what went wrong and “draw consequences from that.”

She didn’t elaborate on what that would entail. Police chief Wolfgang Albers has shrugged off questions about his own future, saying that he will stay in his post, though he acknowledged that the initial failure to mention the assaults was a mistake.

Ralf Jaeger, North Rhine-Westphalia state’s interior minister, said he expected a detailed report from Cologne police this week on who knew what when.

“The Cologne police force must clear up meticulously what happened where and when, what police could know and evaluate when and where, and what measures have to be taken.”

Gilles, the police spokesman, said the city has 10 officers working on the attacks and four men have been detained.

Among the angles police are investigating is whether there are any links to similar crimes committed over the past two years in the nearby city of Duesseldorf, where men have groped women to distract them before stealing their belongings. The two cities are 40 kilometers (25 miles) apart.

Markus Niesczeri, a spokesman for Duesseldorf police, said that since the start of 2014, officers there have identified more than 2,000 suspects of North African origin in connection with organized thefts, though he didn’t say how many. He declined to say whether there have been any arrests in those cases.

“At the moment we can’t make a serious connection because we don’t have the perpetrators from New Year’s Eve,” Gilles said. “It’s not excluded that there are overlaps, but that’s still the subject of investigation.”

“Most of the victims were from outside Cologne who filed criminal complaints in their home towns or with federal police,” Gilles said, adding that they included women of all ages and nationalities.

In addition to widespread shock over the scale and nature of the attacks, the incident has also fueled public debate about Germany’s ability to integrate large numbers of migrants.

Germany registered nearly 1.1 million people as asylum seekers last year, according to Interior Ministry figures released Wednesday, and some politicians who have called for limits on migration have seized on the incident in Cologne to bolster their position.

Germany’s top security official stressed that those involved must be punished regardless of where they come from. Interior Minister Thomas de Maiziere said that “you cannot draw a general suspicion against refugees from the indications that they were perhaps people who looked North African.”

He added that “a bit of patience is necessary to clear up as completely as possible the structure of the perpetrators and the organizational structures there might have been,” including whether there was any link to similar, smaller-scale incidents on New Year’s Eve in Hamburg.

De Maiziere noted that, under German law, criminal behavior has a direct effect on a person’s asylum proceedings if he or she is sentenced to at least three years in prison. He said that “we will have to talk about whether that needs to be changed.”

In any case, “anyone who commits serious crimes, whatever status he is in, must reckon with being deported from Germany,” de Maiziere said.

Antonia Rabente, a 26-year-old student in Cologne, said the mood in the city was divided.

“On the one hand there’s a feeling that what happened is wrong and many people concerned about this. But where people are split is in how to respond,” she said. “I think it’s important to keep the focus on the women who were affected. They need to be the focus of attention now and not misused for attacks on the right to asylum.”

About 100 people protested Wednesday against a far-right rally near the train station that numbered less than 10 people.

Watching from nearby, Gudrun Sauer, a retired civil servant, said she was disappointed by the events and called for a change in the law to allow foreigners found guilty of serious crimes to be deported regardless of whether they face possible persecution in their home country.

But she disagreed with those who blamed the latest wave of refugees for the assaults.

“The people who come here and went through such hardship, they’re hoping for a better future here,” said Sauer. “I don’t think they’d risk doing something like that. You shouldn’t throw everything in one pot.”

Cologne’s mayor, meanwhile, was mocked on social media for saying, when asked Tuesday about what women can do to protect themselves better: “There is always the possibility of keeping a certain distance, more than an arm’s length” from strangers.

Some of those who criticized her felt that Reker was blaming women for the attacks and lambasted the idea that women could have simply protected themselves by keeping men at arm’s length.

Reker said Wednesday that she regretted any misunderstanding, but had merely been pointing to existing prevention and counseling programs in response to a journalist’s question.

“The priority is for concrete security to be provided on our streets and squares,” she said in a statement.