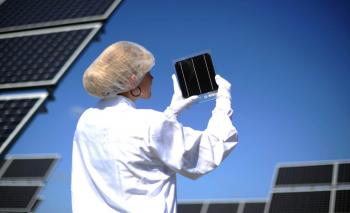 Daniel Boese
biggersmaller
Print
September 6 was a historic day for the German energy industry, with the liberal-conservative government headed by Angela Merkel vowing to reverse the country's position on nuclear energy—and keep Germany's nuclear plants on, rather than shut them down.

For most Germans, July 14 was unspectacular, as temperatures climbed above 30 degrees Celsius. The day set a record not in temperature but in solar energy. For the first time, combined electrical output of solar panels in Germany was more than 50 percent of the output of the nation’s 17 nuclear plants operating at the same time.

Renewable energy had passed a critical threshold, with the nation taking another step in the transition from nuclear and coal to renewable energy. This came seven months after Germany had received an unusual Christmas present. Heavy winds on December 26 delivered free electrical energy, and wind turbines produced up to 20.100 megawatts of power, pushing the price for electricity into the negative: It cost up to 20 cents per kilowatt hours to produce power. Coal plants had to pay for power instead of selling it.

The two days sent a signal—the goal of providing Germany with 100 percent renewable energy is reachable.

For decades the environmentalist movement, blossoming wind and solar industries, as well as Germany’s Green Party dreamed of switching completely to renewable energy. Now political support reaches across the political spectrum. Even the conservative minister for the environment, Norbert Röttgen of the Christian Democratic Union, supports it.

And the development is widely seen as technically realistic. Within the international context, Germany acts as an early adopter: Like the first user buying an iPhone or Google cellphone with Android, the nation pays a premium price, but also figures out the technology, including downsides and upsides. For other countries, the technology will be tried and tested and, due to economies of scale, much cheaper.

Germany carries the benefit of gaining expertise in a growing market. Indeed, while the leading argument for pushing renewable energy has long been action against climate change and reduced carbon emissions, the cases for energy security and job creation follow closely.

Development has not been easy. Germany is not the best suited for renewable energy, lacking volcanic energy like Iceland or a long coast with strong winds like Ireland, Great Britain or Morocco. It does not have as much sunlight as Spain, California or North Africa. Unlike Norway which powers most of its electricity for 4.8 million citizens through hydro-energy, Germany provides power for more than 80 million people and an industrial output surpassed only by China.

One lesson from this—if it can be done here, in the heart of Europe, it can be done anywhere. In 2008 Germany relied on imports of coal, gas, oil and uranium for 70 percent of its primary-energy production.

The policy goal set in the late 1990s was 10 percent renewables. In 2009, 9,800 megawatts of solar power had been installed, as well as 25.8 gigawatts of wind. Currently, 16 percent of electricity is produced by renewable sources. And the experts suggest that it’s possible to go from 16 to 100 percent. The German federal government recently updated its projection of renewables production for 2020 from 20 to 30 percent. The Bundesverband Erneuerbare Energie, an association of producers of renewable energy, goes further, claiming that 47 percent is possible by 2020.

The scientific advisory board to the German government, the Sachverständigenrat für Umweltfragen, produced its own study, mostly performed by the German Institute for Air and Space. Researchers calculated hour by hour throughout the whole year, comparing averages of solar and wind production to balance them with spikes of demand. The results were clear: Not only is it technically possible, but also economically viable. Increase in investment upfront is set off by savings from buying less coal and gas later.

The federal office for environment, Umweltbundesamt, also published a study focusing on regional strengths and connections: While wind is strong in the north and east, solar is stronger in the south, and there are other parts where biomass and hydro-energy can be used for storage. In total, these differences can be used to balance energy production throughout the year.