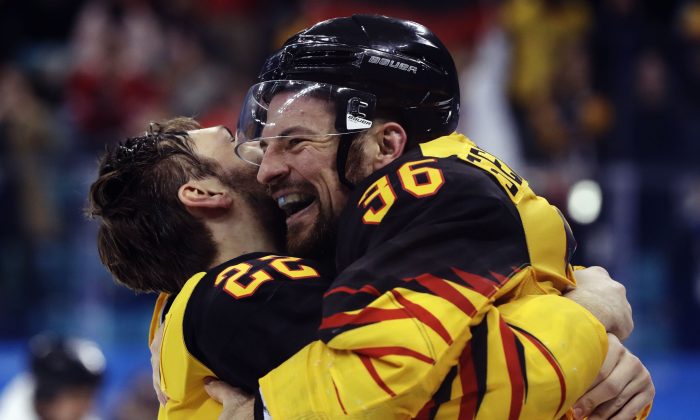 Matthias Plachta and Yannic Seidenberg of Germany celebrate their victory over Canada in the semifinals of the Olympic men's ice hockey tournament in Pyeongchang, South Korea on Feb. 23, 2018. (Reuters/David W Cerny)
Canada

A bit of fun and good sportsmanship from the German Foreign Office led to Canadians being treated to hot chocolate yesterday in Ottawa.

After the nationally devastating 4–3 semifinal loss to the German hockey team on Feb. 23, many Canadians were left despondent and woebegone. Snowmen were made half-heartedly, red and white flags drooped, and maple syrup was left glistening on pancakes unappreciated before the glazed eyes of emotionally lethargic hockey fans.

The bitter recollections of defeat in Canada’s national winter sport were sweetly soothed for many Ottawans, however, when the German Embassy treated them to hot chocolate following an amusing tweet from the German Foreign Office.

Travel advisory: Germans in Canada should exercise a high degree of empathy. Be nice, don’t gloat, give hugs, buy rounds of hot chocolate.

Just imagine how you would feel if Canada beat us in soccer ?

The Germans got an official tweet back from Canada, with the Foreign Policy CAN Twitter account congratulating the Germans on their win while politely pointing out that Canada had its first shot at Olympic gold back in the 1920s, unlike the Germans who had their first chance only this year.

“Congrats on your first shot at gold! We remember our first gold medal match in #IceHockey like it was yesterday… 1920 to be exact,” read the tweet.

Thanks @GermanyDiplo. Congrats on your first shot at gold! We remember our first gold medal match in #IceHockey like it was yesterday… 1920 to be exact. #PyeongChang2018 pic.twitter.com/3rKIonBGDN

Though the Germans’ tweet could have simply been left as a humorous poke and a call for good German sportsmanship, the German Embassy in Canada decided it would actually be a really good idea to follow the foreign office’s advice.

“[We] WILL be buying rounds of hot chocolate,” the German Embassy tweeted on the same day.

We are following @GermanyDiplo's advice and WILL be buying rounds of hot chocolate* for Ottawans! Location, date and time: @Bridgehead at Sparks & Metcalfe, Monday, Feb. 26, 8-9am. (*up to 50 ☕️, first come first served) https://t.co/L3Ftd19AwL

Canadians responded to the tweet with humour and enjoyment, and Germany was called a class act by many.

Another tweeted, “How could anyone stay mad at you?”

Other tweets returned the gesture of good sportsmanship initiated by the embassy.

“German wins were no fluke. Beat Sweden Canada and should have beaten the Russians. Glad hockey is so competitive again,” encouraged one user.

Another congratulated, “Love this! Well done for this & the game too!”

Meanwhile, business was brewed up for Bridgehead at its downtown Ottawa location at Sparks and Metcalfe streets, and for those gathered to share hot chocolate on Feb. 26, fun and friendship ensued.

German Embassy personnel also brought hockey pucks to give out with the hot chocolate. Pictures on the embassy’s Facebook page show all smiles and merriment from the attendees.

Acting ambassador Eugen Wollfarth considered that having more occasions like this would be good for everyone. “This is a possibility, in a very informal way, to have more people-to-people meetings—and help both sides in a happy way,” he said.