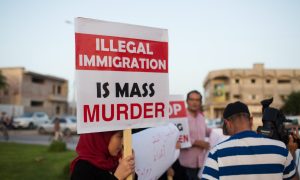 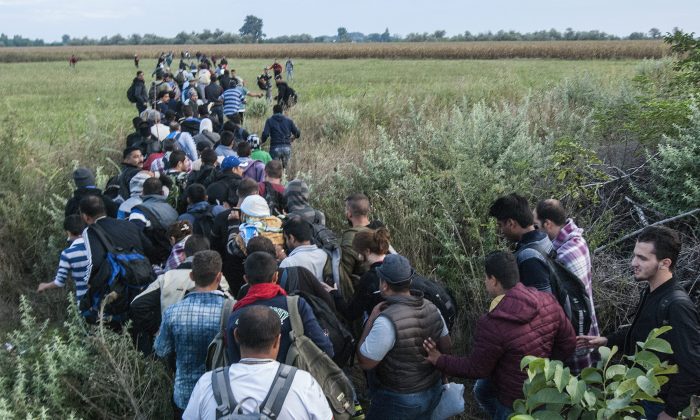 Illegal migrants make their way near the railway crossing at the border between Hungary and Serbia near Roszke, 180 kms southeast from Budapest, Hungary, Tuesday Aug. 25, 2015. (Sandor Ujvari/MTI via AP)
Europe

BERLIN— Germany, France and Britain pressed Sunday for better processing of migrants arriving in southern Europe and for a European Union-wide list of countries considered safe, and a special meeting of EU interior and justice ministers was called for Sept. 14.

Interior ministers Thomas de Maiziere of Germany, Bernard Cazeneuve of France and Theresa May of Britain stressed the need to set up “hot spots” in Greece and Italy by the year’s end to ensure migrants are fingerprinted and registered, allowing authorities to identify quickly those in need of protection.

They called in a statement for a special ministerial meeting in the next two weeks. De Maiziere said the EU couldn’t wait until a scheduled gathering in early October and Luxembourg, which holds the rotating EU presidency, announced later Sunday on Twitter that interior and justice ministers will meet in Brussels Sept. 14 to discuss how to “strengthen the European response.”

Germany, which has seen many asylum requests this year from Balkan countries, is keen to identify “safe” countries to ease returning rejected asylum applicants.

“So that we can help those in need, we must also tell those who are not in need that they can’t stay with us,” Chancellor Angela Merkel said at the chancellery in Berlin Sunday during an annual government open day. Those who do need protection should be integrated more quickly “into our life,” while those who don’t should be sent home quickly, she added.

Authorities expect the number of refugees coming to Germany to reach 800,000 this year, a fourfold increase on last year.

De Maiziere said that the figure would be “too much for Germany” if it remained so high for years, but pushed aside a German state governor’s assertion that the figure could reach 1 million in 2015. The current estimate is “seriously predicted,” he said.

Berlin wants many other EU countries to do more to share the burden. Merkel said the current situation “is not fair.”