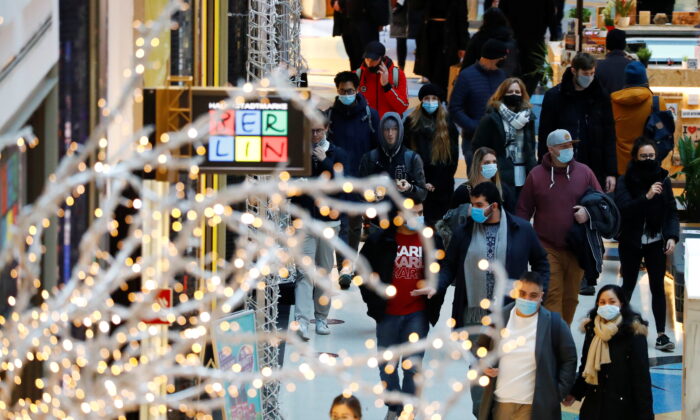 People wear protective face masks as they walk beside Christmas decoration at a shopping mall amid the COVID-19 outbreak in Berlin, Germany, on Nov. 21, 2020. (Fabrizio Bensch/Reuters）
Viewpoints

Christmas is apparently canceled in Germany.

The other day, I was shocked to see videos of German police forcibly detaining a man dressed as Santa Claus for the terrible evil of failing to show his papers and participating in an “unregistered gathering,” which is illegal in Germany. This came a few days after police enforcers marched through a city with six-foot-long rulers to ensure that people were staying far enough apart. Both of these measures came as a result of a new nationwide edict from the outgoing “Supreme” Chancellor Angela Merkel that effectively condemns any unvaccinated people to second-class status.

In language befitting of the vile Mayor Burgermeister Meisterburger (who also arrested Kris Kringle in the 1970 classic “Santa Claus Is Comin’ to Town”), Merkel called the measure a “national act of solidarity,” despite the fact that nearly 30 percent of the population now won’t have access to anything deemed by the all-powerful government to be “nonessential.”

The then-health minister, Jens Spahn, took a more menacing tone. He declared that by spring, “pretty much everyone in Germany … will be vaccinated, cured, or dead.” It has yet to be seen whether or not this is a threat or a promise, considering that COVID-19 has a 99 percent survival rate, but it drips with the eerie specter of Nazism. Merkel’s successor, Olaf Scholz, has also encouraged Germany to pass laws for the forcible vaccination of everyone, following a similar declaration by the neighboring nation of Austria. In that country, unvaccinated people will be fined up to $15,000 for daring to refuse the state’s demands.

For those who don’t remember, the last time Germany followed the political guidance of Austrians was when a young Austrian man named Adolf Hitler took the helm of the state. In fact, Germany today is increasingly looking more and more like Nazi Germany from the 1930s. Back then, Germany passed laws in the name of national health that increasingly pushed Jews out of all aspects of public life and claimed that they were merely following the science. Propaganda announced (pdf) that the “healthy” parts of the population were endangered and unnecessarily burdened by those defined as inferior.

To assist with the efforts to “protect” the nation, Nazi Germany set up camps to isolate Jews and other perceived dangerous groups from the “pure” Germans. Recently, they have returned to such policies and established camps for anyone who might resist their edicts. Furthermore, in Nazi Germany store owners would post signs declaring “Juden unerwünscht”—Jews unwelcome. Today, Germans have begun posting signs with the language updated to read “ungeimpfte unerwünscht”—unvaccinated not welcome.

For 12 long years—from 1933 to 1945—the Nazi regime persecuted, oppressed, and killed anyone they claimed was a danger to the state. Anyone who questioned the justice or propriety of these acts was silenced through one means or another. After the war, once the Allied powers had defeated their armies and conquered their nation, their wicked deeds were exposed to the world. It was determined that “the whole nation has engaged in a lawless conspiracy against the decencies of modern civilization,” and must be reformed so that both Germany and the world would never forget the atrocities that were committed and never allow them again.

However, not even 100 years later, it seems as though they have forgotten. Observers noted after the war that the Third Reich was “perhaps the only nation who carried the prostitution of science to this extremity.” Yet again, Germany is walking down a dangerous path and seemingly seeks to establish a Fourth Reich using the same tactics, methods, and ideas of its forefathers.

Let us in America not follow down that same road but continually steel ourselves against any and all forms of tyranny and oppression. Let us also pray that Bonhoeffers and Niemöllers will once again stand against this familiar foe, and as totalitarianism grows increasingly popular, this year for Christmas, let’s give each other the gift of freedom.