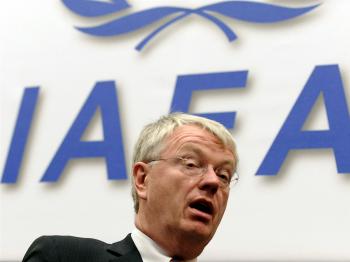 Germany's ambassador to the International Atomic Energy Agency IAEA Rudiger Ludeking attends the board of governors meeting at the IAEA's headquarters in Vienna on November 27, 2009. (Joe Klamar/AFP/Getty Images)
Europe

The announcement came in reaction to Iran underlining its commitment to build 10 new nuclear plants on Sunday.

"What is clear is that if Iran rejects the hand that has reached out, it must expect heavier sanctions," Guido Westerwelle said in a statement.

"Iran must know that the international community's patience is not unlimited," he added.

"I call on Iran to work with the international authorities handling nuclear matters and fulfill its international obligations, immediately and unconditionally."

Tehran’s announcement followed an International Atomic Energy Agency vote of censure against the country for building a second nuclear site near the city of Qom.

Iran's atomic chief Ali Akbar Salehi said on Sunday that the decision to build 10 more was a direct result of the vote.

Western countries suspect that Tehran hopes to use the enriched uranium to build nuclear weapons. The IAEA has called for Iran to send its uranium stocks abroad for enrichment.

Iran insists that it will use the uranium for purely for peaceful reasons.