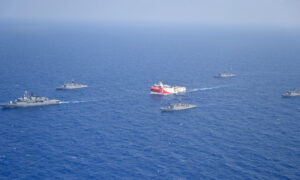 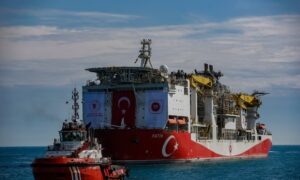 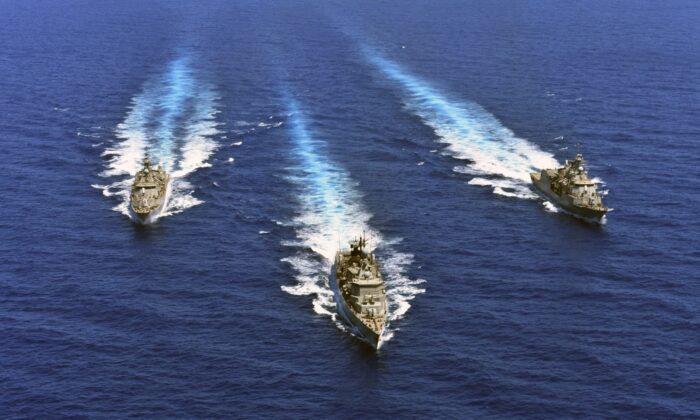 Germany Calls for End to Military Drills in East Mediterranean

ANKARA, Turkey—Germany’s foreign minister on Thursday called for an end to military drills taking place in the eastern Mediterranean to defuse tensions and create conditions for NATO allies Greece and Turkey to resolve a dispute over offshore energy exploration rights.

Foreign Minister Heiko Maas’ comments came as European Union foreign ministers were set to meet in Berlin to try and persuade EU-member Greece and its neighbor Turkey to pull back from the brink of a conflict. The ministers were expected to debate a range of sanctions and other policy options that might convince Turkey to temper its insistence on drilling for energy reserves in disputed parts of the eastern Mediterranean.

Maas, who engaged in shuttle diplomacy between Athens and Ankara earlier this week, stressed the need to “create the conditions for Turkey and Greece to resolve their problems directly with each other.”

Tensions between Greece and Turkey have been running high for weeks after Turkey sent its survey vessel, Oruc Reis, to carry out seismic research, escorted by Turkish warships. Athens, which says the ship is operating over Greece’s continental shelf in an area where it has exclusive rights on potential undersea gas and oil deposits, sent warships to observe and track the Turkish flotilla.

Turkey disputes Greece’s claims, insisting that small Greek islands near the Turkish coast should not be taken into account when delineating maritime boundaries. Ankara accuses Athens of trying to grab an unfair share of the eastern Mediterranean’s resources.

Both countries have been conducting military maneuvers in the area. On Thursday, France was set to join Italy, Greece, and Cyprus in three-day air and sea military exercises off the the east Mediterranean island. Turkey meanwhile, issued a notice, known as Navtex, declaring that it would hold live-fire military exercises Sept. 1-2 off its southern Mediterranean coast, opposite Cyprus. It also extended Oruc Reis’ operations until Sept. 1.

U.S. President Donald Trump on Wednesday held separate telephone calls with the leaders of Greece and Turkey. NATO Secretary-General Jens Stoltenberg said Thursday he was in “constant contact” with Greece and Turkey.

“My message is that the situation must be resolved in a spirit of allied solidarity and in line with international law,” Stoltenberg said as he met German Chancellor Angela Merkel in Berlin. “Dialogue and de-escalation are in everybody’s interest.”

EU Enlargement Commissioner Oliver Varhelyi warned that Turkey’s decades-long quest to join the EU could be under threat, even though membership talks with the bloc ground to a halt years ago.

“The possible accession of Turkey is under major question through these actions,” he told reporters.

Turkish officials meanwhile, accused France of stoking tensions in the Mediterranean by joining military exercises with Greece and Cyprus.

Defense Minister Hulusi Akar said Turkey would not be deterred by the show of force.

“To believe that it would be possible to thwart the Turkish Armed Forces operations with exercises and similar activities is nothing more than a pipe dream,” Akar said in an interview with state-run Anadolu Agency.

Turkish Foreign Ministry Spokesman Hami Aksoy charged that France was deploying warplanes on the ethnically-divided island of Cyprus on the “pretext” of carrying out military exercises. The deployment was against treaties reached in 1960, he said.

“France, which is not a guarantor of the island of Cyprus, is with this attitude dangerously encouraging the Greek Cypriot and Greek duo—who are responsible for the current tensions in the Eastern Mediterranean—to escalate the tension further,” Aksoy said in a statement.

France and Greece will deploy both warplanes and navy ships as part of the drills, while Cyprus will activate its air defense system to test its capabilities, Cyprus’ Ministry of Defense said Wednesday.

Turkey and Greece have both vowed to defend their competing claims in the eastern Mediterranean.

Turkish President Recep Tayyip Erdogan said Wednesday that his country “will never compromise on what belongs to us. We are determined to do whatever is necessary in political, economic and military terms.”

Greek Prime Minister Kyriakos Mitsotakis said Greece is planning to exercise its legal right to extend its territorial waters along its western coastline, which faces Italy, from six to 12 nautical miles. The planned extension would not affect the territory at the center of the Greek-Turkish dispute. Turkey has warned in the past that an extension of Greek waters to 12 nautical miles in the Aegean Sea, facing the Turkish littoral, would be seen as a reason to declare war on Greece.

Akar, the Turkish defense minister, reiterated that Turkey favored dialogue with Greece but was determined to safeguard its rights.

“If our Greek counterparts agree, we would be pleased to host them here,” Akar said.

“We would not allow our rights to be trampled on,” he also said. “Turkey’s strength should not be tested.”

Greek government spokesman Stelios Petsas said the tension in the region was “not being generated by Greece.”

“On the contrary, (Greece) is ready to contribute to any de-escalation, always with respect toward the rules of international law, and in this case, the law of the sea and the rules of good neighborliness,” he said.

By Suzan Fraser and Geir Moulson