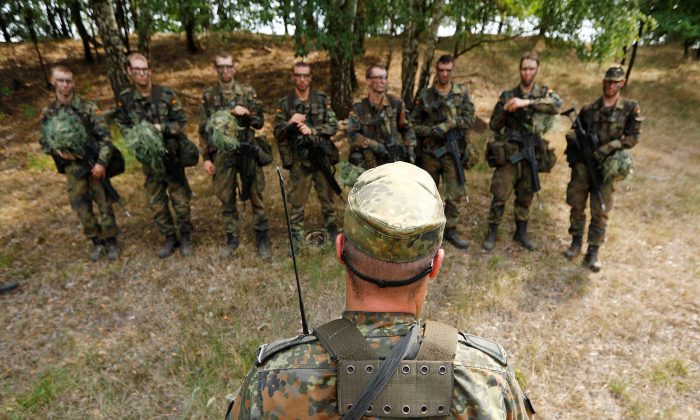 German Bundeswehr armed forces recruits receive a debriefing by an instructor during a drill at a military training area in Viereck, Germany, on Aug. 8, 2018. (Fabrizio Bensch/Reuters)
Stocks

Stock prices of defense companies rose after German Chancellor Olaf Scholz announced that his country would raise military spending, and build up its forces and capabilities, as a response to Russia’s invasion of Ukraine.

Germany’s 2022 federal budget will set aside a one-off sum of 100 billion euros for the country’s military, Scholz said in a policy statement on Feb. 27. The country will invest “more than two percent” of its GDP into defense “year after year,” he added. Berlin had spent roughly 1.53 percent of its GDP on defense last year according to data from NATO. By raising military spending, Germany aims to match targets set out by NATO back in 2006.

According to some analysts, Russian President Vladimir Putin ordered the invasion of Ukraine due to the mounting fears of NATO expansion on the Russian border. The German solution to build arms could encourage other European allies to follow suit leading to a renewed arms race on the continent.

“More resources for defense among U.S. allies in Europe combined with the challenge from Russia could contribute to the development of a larger, more capable … European defense industrial base that could … become more competitive with that of U.S.,” Seth Seifman, an analyst at JP Morgan, wrote in a note.

“However, and in the near-term we see Germany’s announcement as an opportunity for U.S. defense contractors.”

After the Cold War, several European nations cut back on their military capabilities due to the belief that economic interdependence would make war meaningless. Germany’s “Wandel durch Handel” doctrine proposed that commercial ties with Russia will keep Kremlin’s expansionism under check.

However, Russia’s invasion of Ukraine has forced Scholz to declare a historic shift in the country’s defense policy.

In his policy statement, Scholz accused Putin of wanting to build a “Russian empire” and redefine the status quo in Europe “in line with his own vision” by using military force if required. As such, Germany intends to invest “much more” in security to protect “our freedom and our democracy,” the Chancellor added.