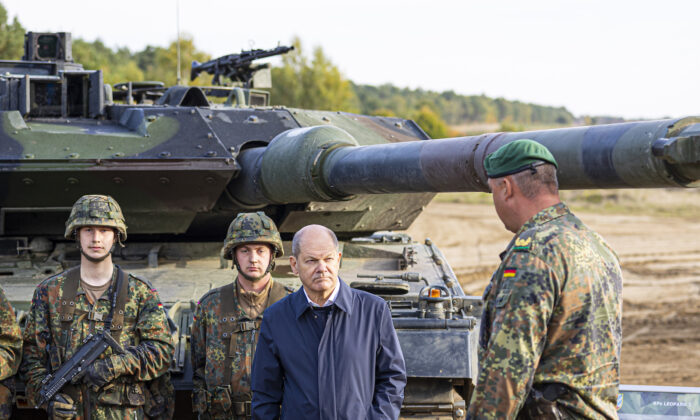 German Chancellor Olaf Scholz stands with German army Bundeswehr soldiers at a Leopard 2 main battle tank during a training and instruction exercise in in Ostenholz, Germany, on Oct. 17, 2022. (Moritz Frankenberg/dpa via AP, File)
By Tom Ozimek

Germany has agreed to send advanced battle tanks to Ukraine ending weeks of speculation whether the country would overcome its reluctance to send weapons into the conflict, with the Kremlin saying the move undermines Russian–German relations and that the equipment will “go up in flames.”

German Chancellor Olaf Scholz said in a statement on Jan. 25 that his government will provide Ukraine with Leopard 2 battle tanks and give other countries that want to send their Leopard 2 tanks—a move that is subject to German approval—the green light to do so.

“This decision follows our well-known line of supporting Ukraine to the best of our ability,” Scholz said in the statement. “We are acting in a closely coordinated manner internationally.”

Ukrainian forces need to be trained how to operate the advanced battle tanks, with German government spokesperson Steffen Hebestreit saying that such training will be carried out in Germany and will “begin quickly.”

In addition to providing the tanks themselves, Hebestreit said Germany will also provide logistical support, as well as maintenance and ammunition.

Hebestreit added that Berlin will provide 14 Leopard 2A6 battle tanks from its stocks “as a first step” while also issuing “appropriate transfer permits” to partner countries that want to send their Leopard 2 tanks to Ukraine.

Poland has been eager to send its Leopard 2 tanks to help Ukrainian forces face their Russian counterparts, with Polish Defense Minister Mariusz Blaszczak saying on Tuesday that Warsaw had officially requested permission from Germany to do so.

German officials said on Sunday that they wouldn’t stand in the way of countries that want to send their Leopard 2 tanks to Ukraine, with Berlin approval required for the German-made tanks to be delivered to a non-NATO country.

Berlin’s decision comes on the heels of reports indicating that Washington is poised to approve sending around 30 M1 Abrams tanks to the conflict zone, as international reluctance to send tanks to face Russian forces in Ukraine fades.

Senate Republican leader Mitch McConnell (R-Ky.) said Tuesday “it’s time, past time” for the Biden administration and allies to send more military aid to Ukraine, and that Washington must provide more tanks and weapons to help Ukraine “win this war.”

Ekkehard Brose, head of the German military’s Federal Academy for Security Policy, said that tying the United States into the decision to send the tanks was crucial in order to avoid Europe facing a nuclear-armed Russia alone.

Berlin’s announcement was met with a fiery response from Kremlin spokesperson Dmitry Peskov, who told reporters in Moscow on Wednesday that the plan for the United States and Germany to send advanced battle tanks to Ukraine is bound to fail for technological reasons.

“I am certain that many specialists understand the absurdity of this idea as well. This plan is quite a losing scheme simply for technological reasons and, importantly, this is a clear overestimation of the potential that will this will add to the Ukrainian armed forces,” Peskov said.

Peskov predicted “these tanks will go up in flames like all the other armor,” adding that the advanced tanks “cost a lot, and this burden will be primarily shouldered by European taxpayers.”

The Kremlin official said Tuesday that Berlin’s provision of the Leopard tanks to Ukraine would further strain Russian—German relations, which he said are “already at a rather low point.”

The head of the union of German military personnel, Andre Wuestner, said that while shipping the Leopards to the battlefront is “good for Ukraine,” it is “bad for the combat readiness” of German forces.

“The truth is that since February we have been distributing weapons and ammunition. At the same time, we are still in a state of freefall. We have not yet achieved changes regarding our own defense capability,” he said.

Besides Germany, Poland and Finland have both pledged to send their Leopard tanks to the battlefront in Ukraine, pending authorization from Berlin.

Also, the United Kingdom promised to give Ukraine 14 of its Challenger 2 main battle tanks and a range of other advanced offensive equipment.

The Abrams tanks that Washington could approve for delivery to Kyiv as soon as Wednesday are widely viewed as less suitable for use in Ukraine owing to heavy fuel consumption and greater maintenance needs.

While some time will pass before the Leopards actually make it to to the front line, Berlin’s move marks the first delivery of Western-made tanks to Ukraine since Russia invaded the country almost 11 months ago.

Following Scholz’s decision to send in the Leopards, British and Polish officials reacted with approval.

British Prime Minister Rishi Sunak took to Twitter to say, “Together, we are accelerating our efforts to ensure Ukraine wins this war and secures a lasting peace.”

Polish Prime Minister Mateusz Morawiecki thanked Scholz in a post that said, “The decision to send Leopards to Ukraine is a big step towards stopping Russia.”