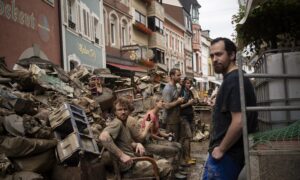 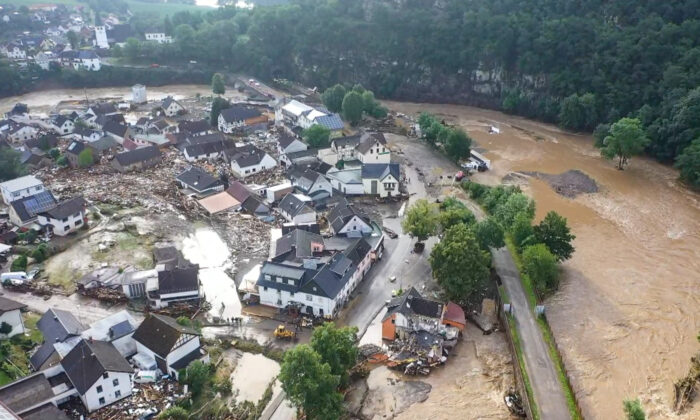 A photo, taken with a drone, shows the devastation caused by the flooding of the Ahr River in the Eifel village of Schuld, western Germany on July 15, 2021. (Christoph Reichwein/dpa via AP)
Europe

The German government has backed 30 billion euros ($35.16 billion) in federal funding on Wednesday to help rebuild the damage in western and southern Germany following heavy rainfall and flooding in mid-July.

Chancellor Angela Merkel announced at a press briefing that the money will be released by the federal state in a “sign of national solidarity,” and the nation’s 16 federal states have reached an agreement on the relief fund for the regions affected by the storm.

Of the 30 billion euros, 28 billion ($32.82 billion) will be split between the federal government and the states, a government official said. The remaining money will be provided by Berlin for infrastructure projects.

The federal states of Rhineland–Palatinate and North Rhine–Westphalia, in particular, suffered heavy damage last month, when rainfall and floods took many by surprise despite extreme weather warnings.

More than 180 people died in what was reported as Germany’s worst natural disaster in half a century.

“It is terrifying,” Merkel told residents of the small town of Adenau in the state of Rhineland–Palatinate last month. “The German language can barely describe the devastation that’s taken place.”

The floods damaged more than 150 schools and 200 nurseries in the state of North Rhine–Westphalia alone, where recovery costs are expected to exceed 13 billion euros ($15 billion), said Armin Laschet, the state’s prime minister.

The country in Western Europe aims for parliament in Berlin to vote the package through in September.