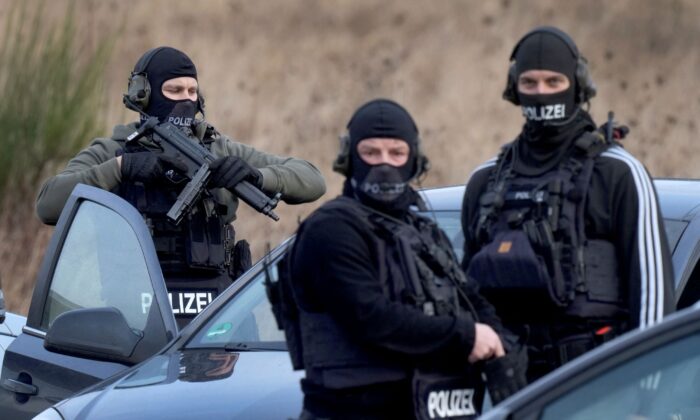 Police officers prepare for an operation close to a road where two police officers were shot during a traffic stop near Kusel, Germany, on Jan. 31, 2022. (Michael Probst/AP Photo)
Europe

BERLIN—Two police officers were shot dead on a rural road in western Germany while on a routine patrol early Monday, police said.

The shooting happened during a traffic check near Kusel at about 4:20 a.m., police in Kaiserslautern said in a statement.

The officers radioed that shots were being fired, spokesman Bernhard Christian Erfort told n-tv television. But reinforcements who arrived at the scene were unable to help the 24-year-old woman and 29-year-old man.

Erfort said he didn’t know whether the officers had seen something particular about the assailants’ vehicle that they wanted to check or whether it was just a routine check.

Police had no description of the perpetrators, the car they used, or what direction they fled in. A manhunt has been extended to the neighboring German state of Saarland, police said.

They called on drivers in the Kusel area not to pick up hitchhikers and warned that at least one suspect is armed.

The younger officer killed in Monday’s incident was still studying at a police academy, the GdP police union said.

“Regardless of the motive, this crime is reminiscent of an execution and shows that the police risk their lives for our security every day,” Interior Minister Nancy Faeser said on Twitter. She said that “we will do everything” to catch the perpetrators.