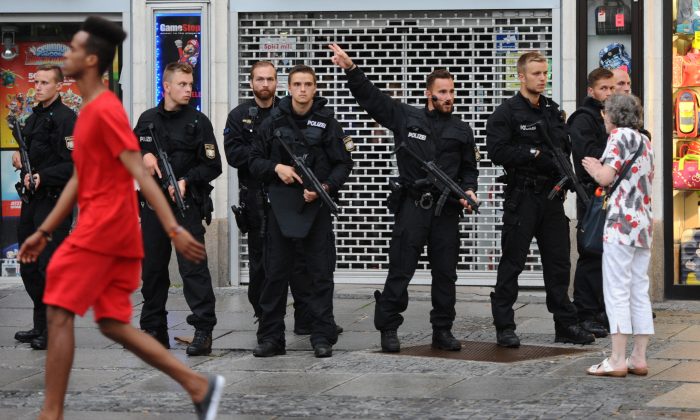 Police officers securing the Stachus hotel talk to residents after a shooting was reported there in Munich, southern Germany, Friday, July 22, 2016. (Andreas Gebert/dpa via AP)
International

BERLIN—German authorities have arrested a 15-year-old boy who they suspect of having planned a rampage and also believe was in contact with a teenager who killed nine people in Munich last week.

The boy was arrested on Monday night and subsequently sent to a psychiatric facility, prosecutors and police in Ludwigsburg, near the southwestern city of Stuttgart, said Wednesday.

A witness had told police that he came across an online chat between the suspect and the Munich shooter, who killed himself following his July 22 attack. He then looked at a social media profile on which the boy had posted photos and drawings that pointed to a possible rampage.

There’s no suspicion that the 15-year-old had any knowledge of plans for the Munich attack, police spokesman Peter Widenhorn said.

In questioning, the 15-year-old said that he had considered carrying out a rampage “against the background of personal and school problems,” police and prosecutors said in a statement. However, he told them that he had since given up on the idea.

Prosecutors ruled out a terrorist motive and said the boy was under investigation for unauthorized possession of weapons and explosives.