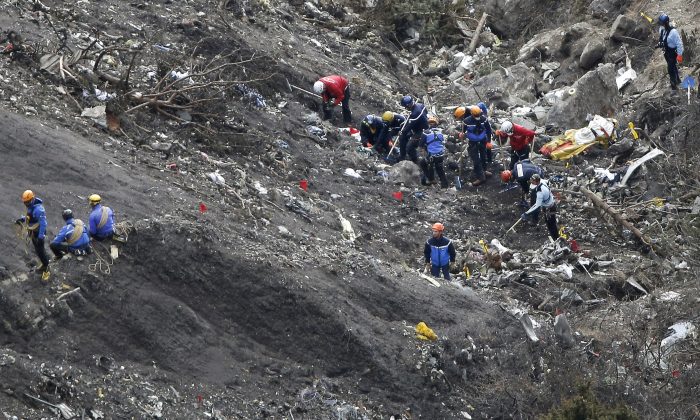 Rescue workers work at debris of the Germanwings jet at the crash site near Seyne-les-Alpes, France. Investigators recovering remains from all 150 people aboard a German passenger jet that crashed into the Alps have accelerated their timeframe for identifying and matching their DNA _ whether that be from a body part or only a shred of skin. (AP/Laurent Cipriani)
Europe

The pilot of the ill-fated Germanwings plane that crashed into the French Alps two weeks ago was pictured for the first time.

Pilot Patrick Sonderheimer is said to have tried to break down the door to the plane’s cockpit after co-pilot, Andreas Lubitz, locked himself inside, according to investigators. Lubitz then accelerated the plane’s descent before it crashed into a mountain, according to data taken from the plane’s black boxes.

#PatrickSonderheimer the name I’ll remember..the name of a #Hero and a #Captain! Already forgot the co-pilot’s name! pic.twitter.com/fbW1rQIJRq

The crash, which killed 150 people on board, appeared to be the result of Lubitz’s careful planning. He apparently was seeing several doctors, including psychiatric specialists, unbeknownst to his employers, said a report from Der Spiegel this week.

The mother of Sonderheimer, 36, told the Telegraph: “He died a hero but he still died, and we are devastated. The light has gone out of our lives.”

A photo of him emerged for the first time at a memorial for 144 passengers and five crew members.

According to the black box recordings, Sonderheimer said to Lubitz, “Open the damn door!” moments before the crash.

He was the father of a 6-year-old girl and a 3-year-old boy.

This week, Lufthansa indicated Monday that it was under no obligation to report to Germany’s national aviation authority the fact that Lubitz had suffered from depression before qualifying as a pilot several years ago.

Germany’s Welt am Sonntag newspaper quoted the Federal Aviation Office as saying that it wasn’t informed about Lubitz’s previous depression before the March 24 crash of Flight 9525.

Lufthansa has said Lubitz informed its flight school when he returned from a several-month break in pilot training in 2009 that he had experienced an episode of “severe depression.” It has said he subsequently passed all medical tests.

The Federal Aviation Office said a Lufthansa medical center issued a fit-to-fly certificate in 2009 and sent it to the office, a procedure that was “in accordance with the legal requirements,” Welt am Sonntag reported, adding that it didn’t inform the office about the previous depression.