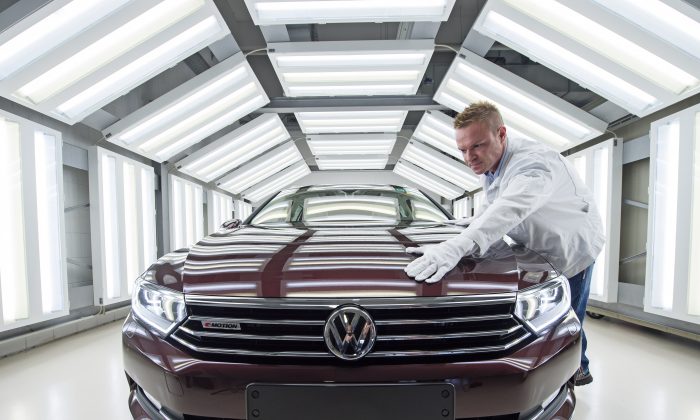 In this Jan 26, 2015 file photo worker Maik Neubert checks a Passat Variant car during the visual inspection during a press tour at the plant of the German manufacturer Volkswagen Sachsen in Zwickau, Germany. (AP Photo/Jens Meyer)
Business & Economy

BERLIN—Germany’s vice chancellor traveled to Volkswagen’s hometown on Thursday to send a message of support to the automaker’s employees, and urged the company to be pro-active in its efforts to clear up its emissions-rigging scandal.

Sigmar Gabriel, who is also Germany’s economy minister, joined a meeting of employee representatives from Germany and beyond as Volkswagen tries to determine who was responsible for the installation of test-cheating software and how quickly up to 11 million vehicles that potentially contain it can be fixed.

“I think it is important to send the message that, in the end, the employees must not pay the price for … criminal behavior by managers,” Gabriel said in Wolfsburg, where VW is headquartered.

“It is clear that the company must clear this up — the more offensively it does so, the better,” Gabriel said. “The more defensively it approaches the question, the more difficult it will be. My impression is that the supervisory board and the new CEO know this.”

Longtime chief executive Martin Winterkorn resigned after the scandal broke in the U.S. on Sept. 18, and was replaced by Matthias Mueller.

Volkswagen has suspended four individuals, including three managers who were responsible for engine development, and hired U.S. law firm Jones Day to conduct an investigation. Mueller says VW will have to review its investment plans.

Why Germany Should Pay War Reparations to Greece

The company says a recall of cars with the suspect software could start in Germany in January and last until the end of next year. On Wednesday, Transport Minister Alexander Dobrindt said the automaker said in reply to German authorities’ demand for a timetable that there would be a recall for vehicles with 2-liter, 1.6-liter and 1.2-liter engines.

VW said the 2-liter engines will need a software update that should be ready before the year’s end and be installed from the beginning of 2016, according to Dobrindt. He said 1.6-liter vehicles will need “an engineering modification that according to Volkswagen shouldn’t be expected before September 2016.”

There are some 3.6 million 1.6-liter cars in Europe, Dobrindt said. He didn’t say what fix 1.2-liter cars will require.

Gabriel warned against using the VW scandal to conduct “a debate about the auto industry and about diesel” in Germany. He said that more than 70,000 jobs depend on modern diesel technology.