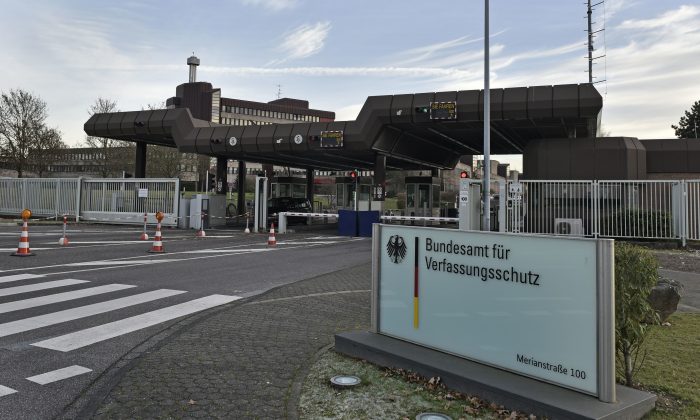 The entrance of the headquarters of the German domestic intelligence service, Bundesamt für Verfassungsschutz, is pictured in Cologne, Germany, on Nov. 30, 2016. (AP Photo/Martin Meissner)
International

When the 51-year-old mole, a German who had converted to Islam, offered to use his new job to provide information to “help the brothers” plan an attack against his employer, German law enforcement swooped in.

It appears little harm was done to the intelligence agency, known by its German acronym BfV, Duesseldorf prosecutors said Wednesday.

“So far, there have been no reliable indications that the accused had already given security-relevant information to people from the violent Salafist scene,” prosecutor Ralf Herrenbrueck, whose office is leading the investigation, told The Associated Press in a written response to questions.

The suspect, whose identity has not been released, is now in custody and has partially confessed to investigators, Herrenbrueck said. He told questioners that his goal was to infiltrate the BfV to warn his “brothers in faith” of operations against them.

The suspect is under investigation on suspicion of preparing an act of violence against the state and of an attempted violation of state secrets regulations, among other charges.

The man, described by German media as a former bank employee who was married with children, started with the BfV in April and was tasked with the surveillance of Salafists, adherents of an ultra-conservative form of Islam that can also turn violent, Herrenbrueck said.

There are an estimated 9,200 Salafists in Germany.

The BfV said it had uncovered no red flags in the hiring or the interviewing process.

“The worker, who started not long ago, had been inconspicuous during the application process, training and at work,” the agency told the AP.

The agency said once it had uncovered the man, who had used a pseudonym online, it turned the case over to Duesseldorf prosecutors.

“So far there is no indication that there is a concrete danger for the security of the BfV or its employees,” the agency said.

Interior Ministry spokesman Tobias Plate, whose ministry oversees the agency, said he couldn’t recall any comparable cases in the recent past and said that there were “no indications that there are fundamental structural problems” at the BfV.

Plate said authorities will have to see whether there are lessons to be learned from the case about recruitment procedures but said “it’s too early to derive any concrete recommendations.”

Germany has not seen any mass-casualty Islamic extremist attacks, but has been increasingly wary since two attacks in the summer were carried out by asylum-seekers and claimed by the Islamic State group. Five people were wounded in an ax rampage on a train near Wuerzburg and 15 in a bombing outside a bar in Ansbach. Both of the attackers were killed.

Those attacks, and two others unrelated to Islamic extremism in the same weeklong period, helped stoke tensions in Germany over the arrival last year of 890,000 migrants.