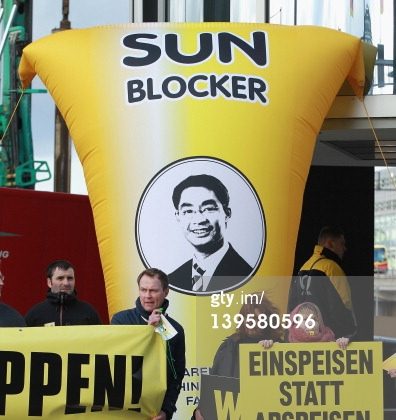 German solar energy production reached a world record of more than 20 gigawatts of output, according to an energy institute.

The International Economic Platform for Renewable Energies (IWR) in a press release reported that solar power stations in Germany on Friday produced at peak times up to 22,000 megawatt.

“There is currently no other country in the world whose solar systems [are] producing electricity with a capacity of more than 20,000 kilowatt,” said Norbert Allnoch, director of IWR.

The energy produced on this sunny day at noontime is equivalent to more than 20 nuclear power stations, according to the institute.

Early this month, the conservative-liberal government moved to cut federal subsidies for solar power, but was blocked by the opposition in the upper chamber. The government argued that the growth of solar energy has been “uncontrolled and at a too high speed,” the newly appointed Environment Minister Peter Altmaier said, according to the newspaper Das Handelsblatt.

Last year, in reaction to the Fukushima disaster, the German government decided to phase out nuclear power over the course of 11 years while shutting down the seven oldest nuclear plants immediately.

A federal study showed that renewable energies could provide more than 30 percent of the electricity needs in Germany, practically substituting all of nuclear power. A 2000 law guaranteeing fixed rates to producers has resulted in a quick growth of renewable energy in Germany over the last decades.