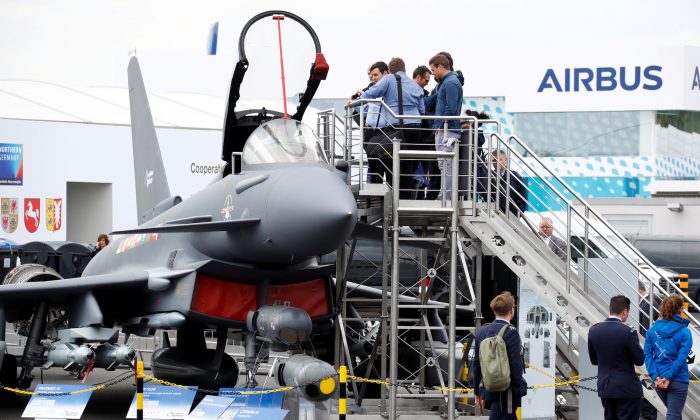 German public support for an increase in defense spending has risen sharply over the past year, according to a joint survey conducted by the U.S.-based Pew Research Center and Germany’s Körber Foundation, a think tank.

As Germany prepares for its non-permanent seat on the U.N. Security Council in 2019–20, the survey sought to determine public attitudes on their country’s readiness to take on more international responsibility and associated military spending. Eligible voters aged 18 and over in Germany were asked a range of questions in September about their foreign-policy attitudes, and the findings were published in The Berlin Pulse, a Körber Foundation publication.

“Germany will be asked to react quickly to international crises and deliver on the promises it made to take on more international responsibility,” Julia Harrer, editor of The Berlin Pulse explained, adding that “for German policy-makers, the balancing act between international expectations and explaining its decisions on the ever-cautious home front will be an even greater challenge.”

The survey found that 43 percent of Germans believed that the defense budget should be bolstered, up from 32 percent last year. The percentage of Germans who say military spending should stay the same fell significantly, to 40 percent this year from 52 percent a year ago.

The number of people who believe defense spending should be reduced remained largely stable at 14 percent; last year, 13 percent were in favor of a decrease.

The shift in public opinion might be the wind in the sails of German lawmakers, as they endeavor to turn increased military spending proposals into reality.

German officials on Sept. 5 presented an ambitious plan for beefing up the country’s armed forces over the next 10-plus years. Defense Minister Ursula von der Leyen described the plan, called the “Capability Profile of the Bundeswehr,” a “grand, comprehensive modernization concept,” according to Defense News.

The strategy proposes an annual defense budget at 1.5 percent of gross domestic product (GDP), or about $69 billion, by the year 2023. The increased spending would be a significant boost to the German military budget, which currently hovers around $45 billion.

Yet even if approved by German lawmakers, the increased spending would still fall short of the NATO-wide objective of spending 2 percent of GDP on defense.

President Donald Trump has repeatedly admonished Germany for spending less than 1.3 percent of GDP on its armed forces. That’s well short of the 2 percent target for NATO member states.

Von der Leyen told Defense News that the new strategy would lift the armed forces toward a set of capabilities substantial enough to defend the homeland and take part in out-of-area missions.

The German military, known as the Bundeswehr, has been plagued by cutbacks, equipment shortages, and mechanical problems. A report by Handelsblatt, a German financial daily, pointed to a worrying lack of working tanks, spare parts, bulletproof vests, tents, and winter clothing.

At one point last year, all six of Germany’s submarines and all 14 of its transport aircraft were out of service. A leaked army report cited by The Washington Post revealed humiliating allegations that German soldiers taking part in a NATO exercise in Norway in 2014 were forced to paint broomsticks black and attach them to armored vehicles because they lacked proper gun barrels.

Critics argue the new strategy is just wishful thinking because it assumes a far greater increase than the center-left Social Democrats, the junior partners in Chancellor Angela Merkel’s coalition, have been inclined to accept.

“The urgently needed funds must be made available,” argued Henning Ott, defense policy spokesman for Merkel’s conservatives, according to Handelsblatt.

Von der Leyen told the Berlin Foreign Policy Forum on Nov. 27 that while “NATO is and will remain the absolute cornerstone of our national defense, Europe needs to be ready to act in its own right.”

“It sounds simple,” she added, according to The Times of London, “but it is a huge logistical challenge that we have ahead of us to be fully operational one day.”

With public support for military spending rallying, that objective seems closer to target.