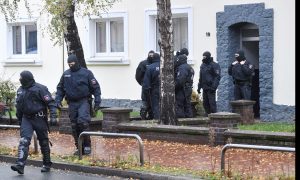 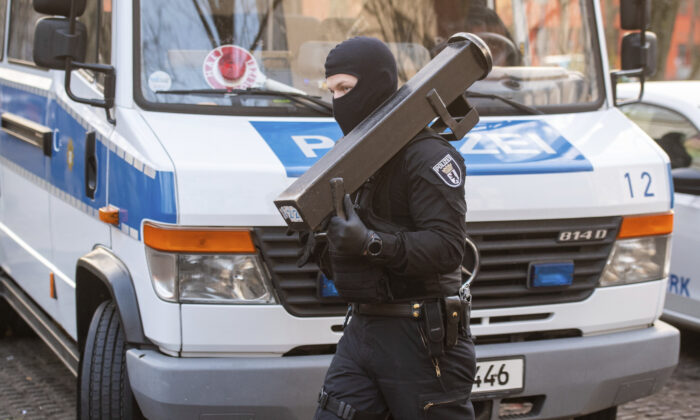 A police walks in front of a car during raids against an Islamist network at the Maerkische Viertel neighborhood in Berlin, on Feb. 25, 2021. (Christophe Gateau/DAP via AP)
Europe

BERLIN—Hundreds of German police officers conducted coordinated raids early Thursday in Berlin and the surrounding state of Brandenburg in the investigation of an organization banned over allegations of Islamic extremism.

Some 850 police, including SWAT teams, were involved in the raids of apartments linked to members of the organization known as Jama’atu Berlin, the state Interior Ministry said.

The organization, whose name translates literally as the “Berlin Group,” was banned by Berlin’s state Interior Minister Andreas Geisel ahead of the raids on the grounds it was a “very radical” group that followed the ISIS terrorist group’s ideology.

“The ban is another clear signal to all religious extremists,” Geisel said. “We will fight the roots of terror. We will tolerate no place where terror is preached and the ISIS terrorist group is glorified.”

Authorities said the organization espoused an anti-Semitic ideology and advocated “armed jihad and terrorist attacks on civilians.” The raids were meant to secure its assets and look for evidence, authorities said, and no arrests were announced.

The organization consisted of two groups—one of women and one of men—who would meet regularly in private homes and parks, and spread their ideology over the internet and with flyers in public spaces, authorities said.