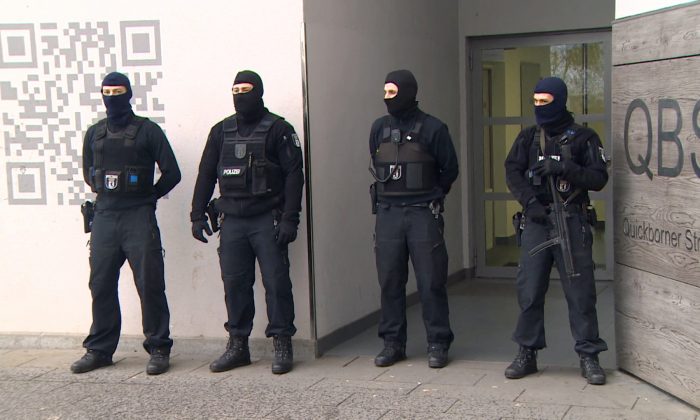 Police stand in front of a residential building in Berlin, Germany on Feb. 28, 2017 after a raid in connection with the ban of the Fussilet 33 organization. (TeleNewsNetwork/dpa via AP)
International

BERLIN—Police searched dozens of sites in Germany linked to a mosque that was frequented by the Berlin market attacker Anis Amri, after authorities banned the Islamic group that operated the prayer house Tuesday.

Some 450 officers raided 24 locations in Berlin, the neighboring state of Brandenburg, and Hamburg in northern Germany starting at 6 a.m. (0500 GMT). In addition to the mosque itself they searched 15 apartments, two company offices and six prison cells. No arrests were made.

Senior security officials said authorities had been watching the mosque for some time because of concern that it had become a meeting point for Islamic extremists. An attempt to ban the organization behind it, known as Fussilet 33, was aborted last summer.

That decision was heavily criticized months later when it transpired that Amri had visited the mosque only an hour before driving a truck into a crowded Christmas market on Dec. 19, killing 12 people and injured dozens more. Amri, a 24-year-old Tunisian citizen, was shot dead by police in Italy four days after the attack.

Berlin’s top security official said authorities had seized funds belonging to Fussilet 33, shut down its website and imposed a blanket ban to prevent the organization from establishing itself under a different name or location.

“It was necessary to ban the organization and all successor organizations to stop it once and for all,” Andreas Geisel told reporters. “People who preach hate have no place in this city.”

Geisel said several prominent members of Fussilet 33 had been arrested in the past on suspicion of supporting extremist organizations such as the Islamic State group and Jund al-Sham. Documents and electronic devices seized during Tuesday’s raids were being examined to see whether members of the organization knew of Amri’s plans, he said.

“We currently have no indications that any further concrete attacks are planned in Berlin,” said Geisel.