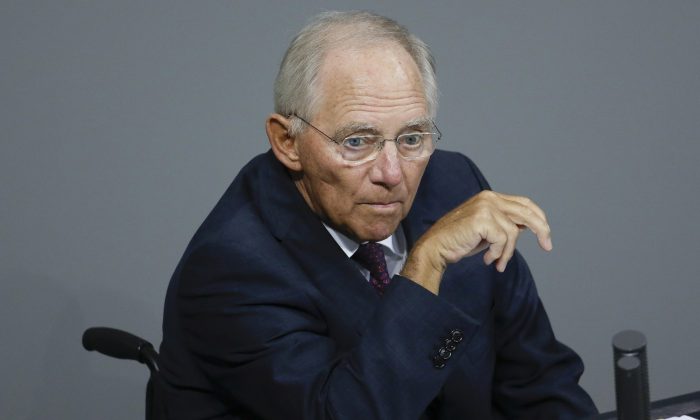 German Finance Minister Wolfgang Schaeuble addresses the German parliament prior to a vote on another bailout package for Greece, in the German Bundestag in Berlin, Wednesday, Aug. 19, 2015. (AP Photo/Markus Schreiber)
Europe

Addressing lawmakers ahead of a vote on the bailout, Schaeuble said approval of the three-year 86 billion-euro ($93 billion) package is “in the interest in Greece and the interest of Europe.”

The German Parliament is expected to approve the bailout overwhelmingly despite misgivings among some conservative lawmakers.

Schaeuble, a senior member of Chancellor Angela Merkel’s Christian Democratic Party, presented the government’s argument before the vote and pointed out that the Greek government has taken big steps over the past few weeks to restore trust with its creditors.

Schaeuble, who has been one of the harshest critics of Greece, conceded that voting in favor of the bailout wasn’t an easy one for him, but that “it would be irresponsible to not use the chance for a new beginning in Greece” in light of the fact that the Greek parliament has already backed a large chunk of reform measures demanded by creditors.

Germany is the largest single contributor to the bailouts and many in Schaeuble’s party remain skeptical.

However, German media have reported that in a test vote late Tuesday, opposition was kept in check as 60 of 311 conservative lawmakers voted against or abstained. In a similar vote last month, 60 members of the caucus voted outright against.

With Merkel’s coalition partner, the Social Democrats, and the opposition Greens, backing the deal, the vote is set to pass easily. The vote is expected Wednesday afternoon.

Greece’s bailout is getting its final approvals in parliaments in several European states. Lawmakers in Spain and Estonia approved it Tuesday, while those in the Netherlands are expected to do so Wednesday as well. The deal needs to clear all hurdles so Greece can get the first tranche of money available and make a big debt repayment to the European Central Bank due on Thursday.

Under the terms of the deal, Greece has to make further spending cuts and tax increases and implement big reforms to its economy.

Schaeuble laid out his hope that the bailout will help turn the Greek economy around. Greece has spent much of the past six years in recession. Its economy is around a quarter smaller than it was and that’s pushed unemployment and poverty rates sharply higher.

“If Greece stands by its obligations and the program is completely and resolutely implemented, then the Greek economy can grow again,” Schaeuble said. “The opportunity is there. Whether it will be used, only the Greeks can decide.”

Greek Prime Minister Alexis Tsipras is mulling whether to call a vote of confidence in his government after a big rebellion among his radical left Syriza party over the bailout. There’s also growing talk in Greece that Tsipras may opt for early elections as soon as next month now that the bailout deal is in place.

Tsipras’ Syriza topped January’s election on a promise to bring an end to hated austerity but after months of tortuous discussions with creditors, he was forced into a U-turn so the country could get the rescue money that maintains Greece’s place in the 19-country eurozone.