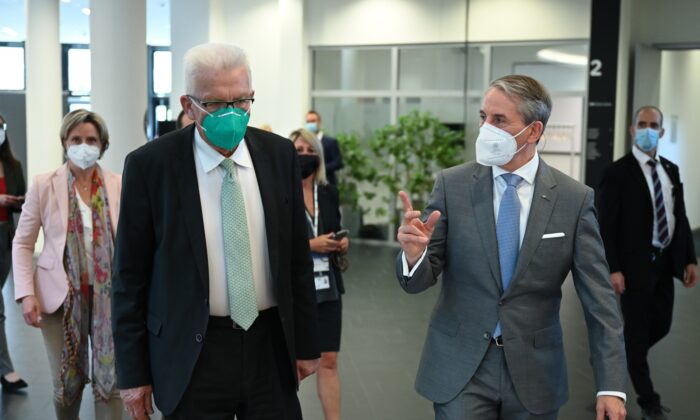 Winfried Kretschmann (L), minister-president of the German state of Baden-Württemberg, and Martin Jetter, CEO of IBM Europe, attend the official inauguration of the first commercially used quantum computer in Europe in Ehningen, Germany, on June 15, 2021. (Bernd Weissbrod/dpa via AP)
Energy

A German state premier has suggested that people use washcloths to clean themselves instead of taking so many showers amid the country’s energy crisis caused by the Russia–Ukraine war.

Winfried Kretschmann, governor of Baden-Württemberg and member of the German Greens Party, talked about the energy crisis in Germany and how he conserves electricity in an interview with Südwest Presse on Aug. 18.

Kretschmann said the situation has highlighted the need for Germany to reduce its reliance on Russia, diversify its supply chains, and increase trading with democratic countries.

“We will continue to trade with countries that are not democratic, but we must not make ourselves dependent on them,” he said, adding that Federal Minister for Economic Affairs Robert Habeck traveled to Qatar for gas deals.

While Germany has 75 percent of its gas storage capacity, Kretschmann said that German people “must do everything we can to prevent a gas shortage” and help the country attain another 20 percent of gas stocks.

Speaking of his personal energy-saving tactics, Kretschmann shared that he uses a “huge” solar power system to heat 70 percent of his water at home. He heats only one room in his house and drives an electric car.

“It’s also healthier if you don’t have the same temperature everywhere in the house. Our home is almost carbon neutral,” he told the news outlet.

When asked if he took cold showers, Kretschmann replied, “You don’t have to shower all the time. The washcloth is also a useful invention.”

Russia has drastically cut flows of gas into Europe via the Nord Stream 1 pipeline since mid-June and currently supplies only 20 percent of agreed volumes, blaming faulty and delayed equipment, while Europe says the move has been politically motivated.

German households will now have to pay almost 500 euros more per year for gas after a levy was set to help utilities cover the cost of replacing Russian supplies, piling pressure on Berlin to come up with further relief measures for the public.

‘Focus More on India’ Instead of China

Kretschmann also urged German businesses to reduce their reliance on China and “focus more on India” instead.

“We must become more independent from China,” he said. “Today, recycling, circular economy, and renewable energies are not only green ideas and instruments against climate change but also a question of national security.”

According to the German Economic Institute’s (IW) study, the German economy became more dependent on China in the first half of 2022, with direct investment and trade deficits reaching new heights.

The study found that German investment in China amounted to about 10 billion euros ($10 billion) between January and June 2022, far exceeding the previous peak half-year value recorded since the turn of the millennium of 6.2 billion euros.

China’s share of German imports rose to 12.4 percent in the first half of 2022, compared with 3.4 percent in 2000, while German imports of Chinese goods surged in value terms by 45.7 percent year-over-year during that six-month period, according to the study.

Germany’s trade deficit with China had leapt to almost 41 billion euros by mid-2022, the IW said, adding that the gap was set to widen further.

The IW called for a policy turnaround, urging a reduction in incentives for doing business with China and a shift towards more trade with other emerging markets, particularly in Asia.