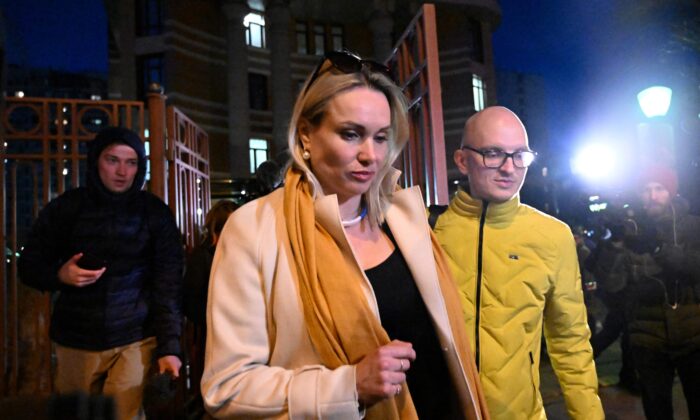 Marina Ovsyannikova, the editor at the state broadcaster Channel One who protested against Russian military action in Ukraine during the evening news broadcast at the station late March 14, leaves the Ostankinsky District Court after being fined for 30,000 rubles (about $270) for breaching protest laws in Moscow on March 15, 2022. (AFP via Getty Images)
Media & Big Tech

The German newspaper Die Welt has hired a new reporter: the Russian journalist Marina Ovsyannikova, who drew the world’s attention after a surprising stunt on Russian state television in protest of her native country’s recent and continuing invasion of Ukraine.

Ovsyannikova “is now a freelance correspondent for Die Welt, reporting from Ukraine and Russia, among other places,” said the newspaper in a statement. Die Welt is the flagship newspaper of Axel Springer SE, a German media group that also owns the American publications Insider and Politico.

“At a crucial moment, Marina Ovsyannikova had the courage to confront Russian viewers with an unembellished view of reality,” said Welt spokesman Ulf Poschardt. “In doing so, she defended the most important journalistic ethics—despite the threat of state repression. I am excited to be working with her.”

On March 14, Ovsyannikova appeared in the background of the evening news broadcast Vremya on state-owned Channel One Russia, holding a bilingual English and Russian sign condemning the war, telling the audience that they were “being lied to” by the state news broadcast.

In the immediate aftermath of her protest, Ovsyannikova was reportedly taken into police custody for 14 hours of questioning. She was ultimately released with a 30,000 ruble fine—roughly worth $280—and she is currently under investigation for charges of spreading “false information.” She may also face prosecution for using the term “war” to describe the conflict, in contradiction to the Russian government’s insistence on referring to the invasion as a “special military operation.”

“The fine ‘is not the end of [the] story because I have not yet been fined or prosecuted for my appearance on the TV news broadcast. So I think there may be further prosecutions coming,” Ovsyannikova told FRANCE24.

Ovsyannikova announced her resignation from Channel One Russia on March 17. French President Emanuel Macron offered her asylum in France, but Ovsyannikova declined, claiming that she wanted to remain in Russia.

Ovsyannikova has stated that Die Welt “stands for what is being defended so vehemently by the courageous people on the ground in Ukraine right now: for freedom.”

Her hiring is effective immediately.