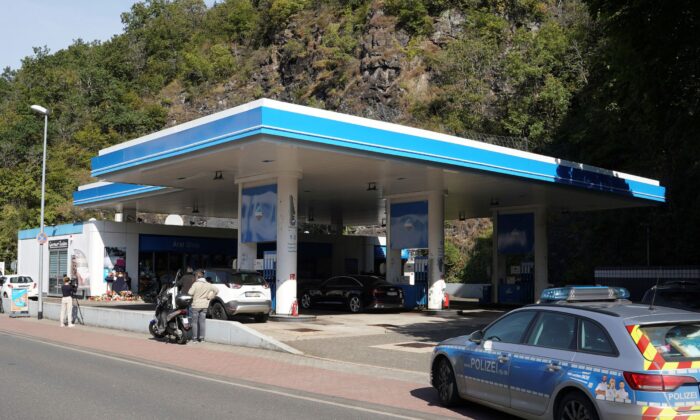 Media and a police car stand in front of a gas station in Idar-Oberstein, Germany, on Sept. 21, 2021. (Thomas Frey/dpa via AP)
Europe

German Man Convicted of Murder After Killing Over Mask Mandate

BERLIN—A man in Germany was convicted of murder and given a life sentence Tuesday for fatally shooting a gas station clerk following a dispute over face masks.

The September 2021 killing in the western town of Idar-Oberstein shocked the country. The defendant also was convicted of illegal weapons possession because he didn’t have a license for the gun used in the killing, German news agency dpa reported.

Authorities have said the 50-year-old man told officers he acted “out of anger” while trying to buy beer at the gas station after the 20-year-old clerk refused to serve him without a mask.

At the time, Germany required mask use in stores.

Police said the suspect, a German citizen identified in local media as Mario N., left the gas station after the dispute but returned a half-hour later and shot the clerk in the head.

He initially fled the scene but turned himself in after police launched a large-scale manhunt.

Defense lawyers in the trial, which lasted six months, had sought a conviction for manslaughter. They argued that there were limits to how far the suspect, who according to an expert was intoxicated when the fatal gunshot was inflicted, could be held criminally responsible for his actions.

Prosecutors had called for the court to find the defendant “seriously culpable,” which would have effectively barred him from the early release after 15 years that is typical for people in Germany given life sentences. Judges didn’t do so.