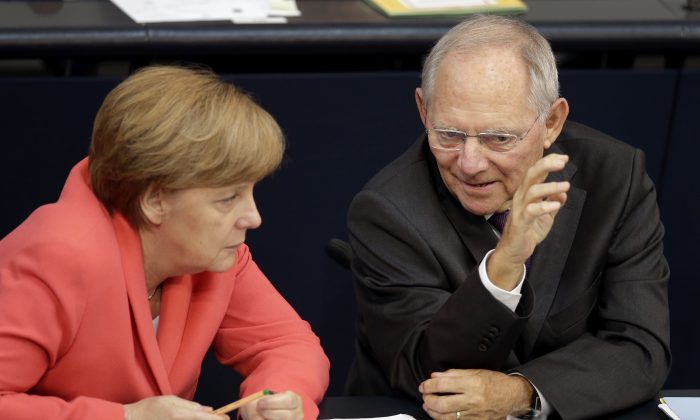 BERLIN—Chancellor Angela Merkel was asking German lawmakers Friday to clear the way for negotiations on a new, third bailout package for Greece, arguing that it would be negligent not to try for a deal.

After a preliminary agreement on Monday, Germany’s government has to get a parliamentary mandate for potentially difficult talks on details of the three-year bailout expected to be worth 85 billion euros ($93 billion).

Germany was the largest single contributor to Greece’s previous two bailouts, and has taken a hard line against the country, insisting on stringent spending cuts and tax hikes in return.

Merkel told a special session of Parliament that lawmakers faced “a decision for a strong Europe and a strong eurozone.”

Bailing out Greece isn’t popular among Merkel’s conservatives and the chancellor acknowledged concerns over the chances of a successful bailout.

Merkel stressed there will be strict monitoring of Greece’s reform efforts and that “simple declarations of intent are not enough.”

She said that she could recommend opening negotiations “with full conviction.”

“The principle … of responsibility and solidarity that has guided us since the beginning of the European debt crisis marks the entire result from Monday,” she said. “And secondly, the alternative to this agreement would not be a time-out from the euro that would be orderly — because it was wanted by Greece and shaped by everyone together — but predictable chaos.”

“I know that many have doubts and concerns about whether this road will be successful, about whether Greece will have the strength to take it in the long term, and no one can brush aside these concerns,” she said. “But I am firmly convinced of one thing: we would be grossly negligent, even irresponsible, if we did not at least try this road.”

In Athens, Prime Minister Alexis Tsipras was widely expected to reshuffle his Cabinet Friday or over the weekend, following a rebellion within his party over a parliament vote to approve painful austerity measures demanded for new bailout talks to start.

Early Thursday, 38 of Tsipras 149 radical-left Syriza party lawmakers dissented, with 32 voting against him outright and the other six abstaining. The dissenters included two cabinet members — the energy and welfare ministers — as well as the parliament speaker and the former finance minister, Yanis Varoufakis.

The legislation, which includes consumer tax increases and pension cuts, was part of conditions demanded by Greece’s European creditors in order to start negotiations on a third bailout, worth about 85 billion euros ($92 billion). The bill passed 229-64 in the 300-member Greek Parliament, thanks to votes in favor by three pro-European opposition parties.

Elements of the bill were to be implemented immediately, with changes to consumer tax going into effect Monday, the finance ministry said.

Greek banks were also to reopen Monday for the first time in three weeks after capital controls were imposed June 29, ahead of a referendum Tsipras called on creditor proposals for reforms. Greeks will still be limited to cash withdrawals of 60 euros ($67) per day.

Tsipras has acknowledged the measures he was forced to take went against his party policies and his election promises to repeal austerity imposed over the last five years in return for Greece’s two international bailouts. But he has insisted he had no other choice, as the alternative would have seen Greece catastrophically forced out of Europe’s joint currency, the euro.

In a party meeting Thursday, Tsipras criticized the hardliners who voted against him.

He said their decision to not shoulder the responsibility along with him and the other 110 Syriza lawmakers who voted in favor was “in conflict with the principles of comradeship and solidarity and at a crucial time creates an open wound” in the party, according to a government official at the meeting. The official revealed details of the closed-door meeting on condition of anonymity.

The dissenters’ decision, Tsipras said, forced him to continue governing with a minority government until Greece’s bailout deal is concluded — something expected to take a month or more.