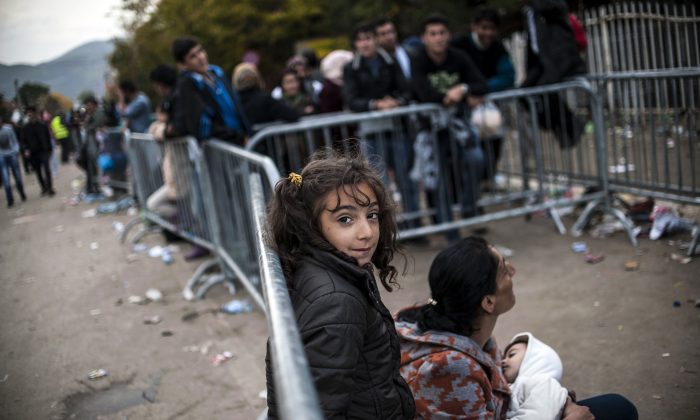 A young girl stands smiles from behind a barrier as migrants and refugees wait to be registered at a refugee center in Presevo, southern Serbia, on October 19, 2015. (ARMEND NIMANI/AFP/Getty Images)
Europe

BERLIN—Germany and French authorities raided two unconnected human smuggling operations, saying Wednesday that they were bringing refugees into Germany by plane and sneaking others across the English Channel by boat.

Hundreds of thousands of refugees and other migrants have flooded to Germany in recent months seeking to escape war and poverty and start a new life. Many of them pay human smugglers to take them across borders.

The alleged head of the group of 17 suspects, who was only identified as a 24-year-old man, was arrested in the western city of Essen. Police also confiscated weapons and smuggled goods in the raids.

Federal police said the network operated mostly with forged passports and tried to bring people to Germany via plane. The traffickers charged around 10,000 euros ($11,000 dollars) per person which in most cases had to be paid in advance.

Homeland Security Taking to the Sky in Drug Smuggling Fight

Many of the asylum seekers never made it to Germany, however, as their fake documents were recognized by authorities along the way.

One 10-person Lebanese family, for example, was detained in Malaysia for several weeks after being stopped there en route, police said. Eventually, they received assistance from the U.N. refugee agency in connection with the German Embassy and were allowed to travel on to Germany for humanitarian reasons.

In France, the Interior Ministry said authorities had detained eight people accused of involvement in smuggling migrants to Britain by rubber boat from the northern French city of Dunkirk.

The smugglers were allegedly charging up to 12,000 euros ($13,170) for the trip across the English Channel, Interior Minister Bernard Cazeneuve said in a statement.

French authorities have dismantled 200 networks and detained more than 3,000 people so far this year in investigating human trafficking networks, Cazeneuve said. He said French-British cooperation against illegal migration has also been reinforced since he met with British Home Secretary Theresa May on Monday.

Thousands of people fleeing war and poverty have gathered around the French port cities of Calais, Dunkirk and other sites in hopes of sneaking across the Channel in ferries or undersea trains to Britain.

More than a dozen have died this year attempting the dangerous journey.