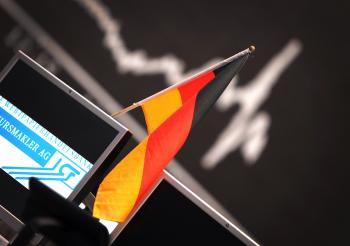 A board displaying Germany's share index DAX at the stock exchange in Frankfurt/Main, central Germany on July 2.The German economy is recovering much faster than experts expected and is the fastest growth within the European Union. (Daniel Roland/Getty Images)
Business & Economy

Monika Weiss
View profile
Follow
biggersmaller
Print
MUNICH—Less than two years after the global financial crisis dragged down many of the world’s economies, the German economy is recovering much faster than experts expected, having the fastest growth within the European Union.

Germany’s gross domestic product rose by 2.2 percent in the second quarter of 2010, exceeding the country’s growth from the previous quarter. “Such a quarter-on-quarter growth has never been recorded before in reunified Germany,” stated the German Federal Office of Statistics in its report released Friday.

Lehmann told The Epoch Times that there is a large demand for German industrial goods such as machines, automobiles, and so on, from the Asian market, lead by China.

The German domestic market has been showing unexpectedly high levels of demand as well.

Lehmann says that the atmosphere in companies is also improving quickly, with investments being made in construction, equipment, computers, IT systems, and so on, which had a positive impact on the job market.

According to the German statistics office, employment in the country is also booming. In the second quarter, 40.3 million people were employed, representing an increase of 72,000 persons or 0.2 percent over a year earlier, when the country was deep in the throws of the crisis.

Lehmann says there is now a shortage of qualified workers in Germany, so much so, that the country is engaged in a dialogue about strategies to meet the demand.

Should Germany do more to attract qualified employees from aboard, including from emerging countries or students from other countries studying at German universities? Are these students too important for the development of their own home countries? Should Germany’s education system offer better educational opportunities to immigrants? These questions are a hot topic of debate on Germany's radio stations, newspapers, and TV talk shows.

However, this unexpected success comes with a warning as well: The economy is rising as quickly as it fell, which could cause fragility and counteractions.

For Lehmann, the equation is complicated and many questions remain: When the state support ends, will the government make follow-up demands? If the central national bank increases interest rates, what will the consequences be? Will companies curtail investment because money is  more “expensive?” There is no historic precedent for this situation.