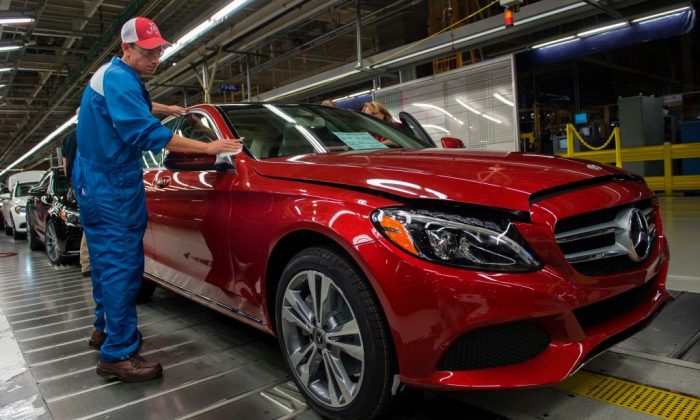 An employee does final inspections on a Mercedes-Benz C-Class at the Mercedes-Benz US International factory in Vance, Alabama on June 8, 2017. (ANDREW CABALLERO-REYNOLDS/AFP/Getty Images)
Economy

German Companies Upbeat About US

Despite trade tensions, German firms expect a record level of investment in the United States in 2018
By Emel Akan

According to the German daily Handelsblatt, “tariffs and Twitter tantrums” have not changed the business bond between the United States and Germany. Many German firms are expanding their U.S. operations.

Half of the German companies currently in the United States plan to invest more, and 53 percent of them are planning to hire more people, according to a survey mentioned in the Handelsblatt report.

CompuGroup Medical, a German medical software firm, is one of the companies that will substantially increase its U.S. operations.

“The U.S. climate is extremely positive,” CEO Benedikt Brückle told Handelsblatt. “We’re not selling steel.” Brückle was referring to the tariffs President Donald Trump has put on steel imported from the EU.

German hostility toward the United States, however, is causing a real problem, says Brückle.

“I think we Germans look too negatively on America now. My American colleagues think very differently about Trump,” he said.

U.S. tax reform, which was signed into law by Trump in December, is expected to have significant implications for the global foreign direct investment (FDI) landscape. The tax bill could lead to the repatriation of nearly $2 trillion of overseas funds, according to the U.N. Conference on Trade and Development.

The European Union—in particular, Germany—is expected to lose ground in the competition for FDI. A significant volume of new investment and jobs will shift from Europe to the United States, according to German economists.

The new U.S. tax code reduces the federal corporate tax rate from 35 percent to 21 percent. When combined with the average of state and local corporate tax rates, the U.S. statutory rate would be approximately 26.5 percent, which is below the current weighted average of the OECD of 31.12 percent, according to the Tax Foundation.

A lower corporate tax rate will restore the nation’s competitive edge, say experts. For years, the old tax code hindered FDI, which is a significant contributor to a country’s economy.

Ernst & Young estimated that investment into the United States would have been 14 percent higher during the period 2004 to 2012 if the U.S. corporate tax rate had been competitive.

Besides tax cuts, foreign investors also benefit from regulatory relief in the United States. According to Handelsblatt, German companies are enjoying the numerous business-friendly policies Trump has pushed through since he took office in January last year.

German giants Siemens and Mercedes as well as German energy companies like Innogy, E.ON, and EnBW are investing in the United States and are not put off by Trump’s trade policies.

“The entrepreneurial spirit is unique here, and deregulation means the country offers something very unusual,” Barbara Humpton, head of Siemens in the United States, told Handelsblatt.

In addition, the Trump administration has rolled out a $1.5 trillion plan to renew U.S. infrastructure. The plan relies on funding from state and local governments as well as private investors. Infrastructure projects are attractive asset classes for global investors due to their long-term and predictable nature.

States across the country also want to reap the benefits of rising business and investor confidence, hence they are competing to offer the best business environment to attract foreign investors. States are investing in skilled workforce development, infrastructure upgrades, and red-tape reduction initiatives.

German firms employ roughly 700,000 people in the United States, with a total investment amounting to $292 billion, according to the 2018 German American Business Outlook (GABO) survey by the German American Chamber of Commerce.

Despite concerns about trade and the availability of a skilled workforce, “100 percent of the surveyed German companies are expecting growth for their own businesses for the first time since the inception of the GABO survey,” stated the report.

“At the same time, only 2 percent expect the U.S. economy to contract.”

In January this year, the United States began imposing tariffs of up to 30 percent on solar panels and up to 50 percent on washing machines.

In response, the EU announced that beginning in July, it will start imposing duties on a list of American goods. The bloc has also taken its case to the World Trade Organization (WTO).

Despite rising protectionism, foreign investor appetite is unlikely to change, according to experts.

“In a time of rising anti-globalization and protectionist sentiments, investors tell us they are continuing to rely on FDI for growth strategies,” Paul Laudicina, a partner and chairman emeritus at management consulting firm A.T. Kearney, stated in a report. “In contrast to international trade, FDI enables a company to establish a local presence.”

And “protectionist rhetoric” is one of the factors that motivate foreigners to invest in the U.S. market, as FDI gives them a local footprint in the world’s largest economy, said the report.

German companies are investing in the U.S. market through both acquisitions and the expansion of their existing operations. Like many U.S. companies, however, they struggle to find skilled labor. They have taken the initiative to grow their own workforce.

“An impressive 25 percent of German companies are leading the charge by establishing apprenticeship programs as a solution to keep their productivity at maximum capacity,” stated the GABO survey report.

Despite tariffs and the workforce problem, German companies are still eager to grow in the United States, according to the Handelsblatt report.

In North Carolina 15 German companies are launching new projects, the report stated, adding that the tariffs have spurred investors into early action.