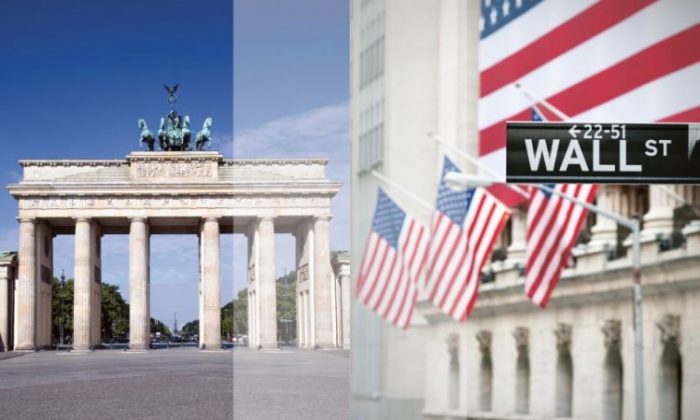 This photo montage puts Wall Street right next to the Brandenburg Gate in Berlin. German-American business ties are strong and could be getting stronger, according to a survey of senior managers of German companies. (www.ahk-usa.com)
Business & Economy

German companies operating in the United States are optimistic looking into 2013 and hope to strengthen the U.S.–German relationship. They expect moderate growth and want to hire staff in 2013.

“The transatlantic market place is still the most important global market,” said Busso von Alvensleben, the German consul general in New York. In his opening remarks at the German American Business Outlook (GABO) conference, he stressed the need to deepen the U.S.–European economic partnership. GABO, which takes place once per year, was hosted by the German American Chamber of Commerce (GACC) in New York, Dec. 3.

There seem to be plenty of reasons to continue the successful relationship. At least, German companies operating in the United States are upbeat about the prospects in this country. Consultancy firm Roland Berger conducted a survey among senior managers of German companies operating in the United States on behalf of the GACC. The results show a “remarkable level of confidence,” according to Roland Berger Partner Antonio Benecchi.

Of the 228 respondents, 87 percent think that the U.S. economy is going to grow next year, albeit at a moderate pace. The companies also expect that they will grow even faster than average. Over 3,500 German majority-owned businesses operate in the United States. Last year, they invested a total of $216 billion and employed 569,600 people as of 2010, according to statistics by the Department of Commerce.

This optimism is reflected in decisions to hire new staff and invest in new projects. “You see a significant increase in initiatives that have to do with … new product launches, which is consistent with the expectations that the market is growing, that their revenue will continue to grow,” says Benecchi. Seventy-six percent of respondents also said that they plan to increase staff in 2013.

Despite the optimism, the survey as well as a panel of experts highlighted certain areas in need of improvement. One of these areas is the shortage of skilled labor in manufacturing.

“The low hanging fruits are gone,” says Jörg Klisch, vice president at Tognum America Inc., when asked about how his company deals with the shortage of skilled labor in the United States. The U.S. subsidiary of German company Tognum manufactures diesel engines for propulsion of heavy machinery and for powering energy systems.

“It’s really competition, it’s highly competitive,” he says, noting that his company needs engineers and technicians that can handle more and more complex issues. Yet, according to Klisch and the survey respondents, well-trained young manufacturing workers are hard to find in the United States.

“It has not been addressed. Nobody knows exactly what the Federal government can do versus the different regions and the states in conducting any kind of organized activity. There is a $30 billion program on jobs and growth, and it contains a lot of elements that are directed toward education, but still there is a lack [of clarity] of who is in the lead. I think this is something we should further on address,” says Thomas Zielke, CEO of RGIT, the Washington, D.C., liaison office of German industry federations and chambers of commerce.

Training Should Start in High School

Due to this lack of clarity, many companies start their own training programs, which are modeled after the German system of picking up a trade while still going to school. German teenagers interested in learning a manufacturing job usually stop attending school full-time after grade nine.

They then continue school part time and also work for a company that teaches them the tricks of the trade. They also earn a salary. At the age of 18, these teenagers are fully equipped to perform a wide range of manufacturing jobs. Other more technical programs start after completing the 10th grade.

“What we did, we contacted the high schools. … And we said why can’t we train high-school students in 11th and 12th grade(s). And we started a program and as of today we actually have four students in the program,” says Jörg Klisch, whose company Tognum emulated this approach in the United States.