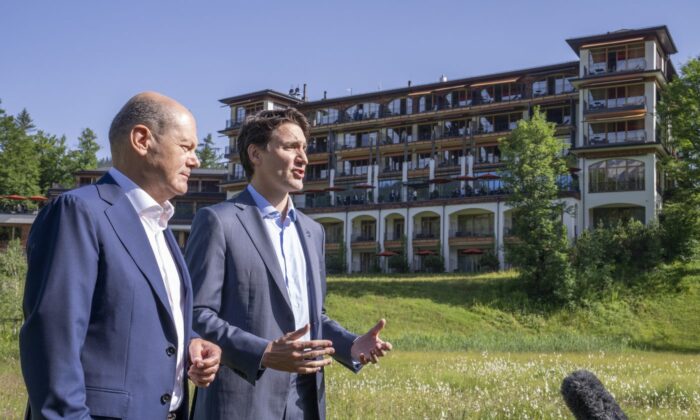 Prime Minister Justin Trudeau and Olaf Scholz, Chancellor of Germany stop to talk to the media as they take a stroll at the G7 Summit in Schloss Elmau on June 27, 2022. (The Canadian Press/Paul Chiasson)
Canada

Prime Minister Justin Trudeau will accompany the chancellor of Germany, Olaf Scholz, on a brief Canadian visit later this month that will include stops in Montréal, Toronto and Stephenville in western Newfoundland, his office announced on Saturday.

Details of the visit were outlined in a release shared by the PMO, which said the Aug. 21-23 visit starts in Montreal, where meetings will take place with German and Canadian business leaders. A tour is also scheduled at a local artificial intelligence institute.

Trudeau and his government have faced criticism over a decision earlier this year to grant a permit exempting Siemens Canada from sanctions against Russia that allow it to return a turbine for use in a pipeline that supplies natural gas to Germany.

The turbine was repaired at a Siemens facility in Montreal and the government defended the move as necessary to secure gas supplies for Europe.

The statement announcing Scholz’s tour notes the two leader’s visit to Montreal will advance shared priorities between Canada and Germany “including our unwavering support for Ukraine, protecting peace and security in Europe and around the world, and addressing the broader global impacts of Russia’s illegal and unjustifiable invasion.”

“The leaders will also continue collaboration on ways the two countries can work together to safeguard energy security, and accelerate the global transition to clean energy, including through secure access to key resources like clean hydrogen and critical minerals,” the statement read.

The two leaders will then head to Toronto, where Trudeau will take part in the virtual summit about Russia’s annexation of Crimea, followed by an appearance at the Canada-Germany Business Forum.

The trip will conclude with a stop in Stephenville, N.L., where Trudeau and Scholz will attend a hydrogen trade show. The statement notes the two countries also intend to “formally deepen” a shared goal of advancing a clean economy, but offered no other details.

“Germany and Canada are close friends on the world stage. We are tied by our shared commitments to democracy, peace and security, including our support for Ukraine, a clean, healthy future, and an economy that works for people,” Trudeau said in the statement.

The statement says the two men will also talk about the automotive sector and climate change.

The prime minister and chancellor last met in June at the G7 Summit in Germany.

The government submitted the “memorandum for action” and the permit itself in Federal Court in response to a legal challenge of the turbine decision filed by the Ukrainian World Congress.

The memo noted the specialized facility in Montreal working on the turbine employs over 400 “highly skilled” employees and is the only one in the world certified to do maintenance on the equipment.

It also cautioned that not returning the turbine could ultimately weaken support for the Western allies’ strong stance on Russia. It said without the turbine, Russia could blame Western sanctions for limiting the Nord pipeline’s ability to operate, and that would likely further increase world energy prices and global inflation.