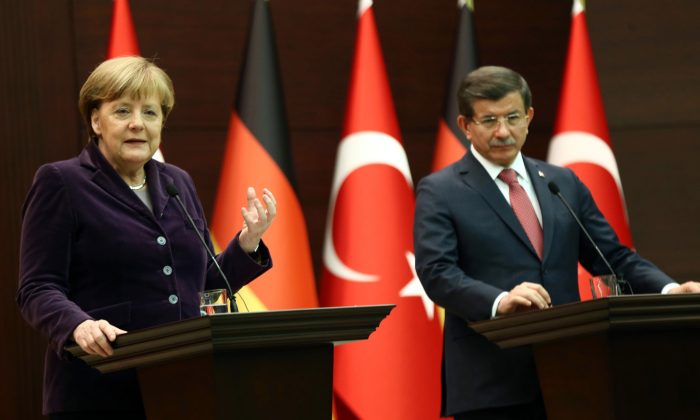 There has been a great deal of back-and-forth activities between the European leaders and German Chancellor Angela Merkel on the one hand, and between Merkel and her Turkish counterpart Prime Minister Ahmet Davutoglu on the other. The aim is not only to stop the much-euphemized “Tsunami of refugees” that are pouring into Western Europe, with Germany as the final destination, but also to repair the deteriorating relations between Merkel and her European counterparts.

However, at the heart of such activities is Merkel’s endeavor to bolster her sagging political career as the leader of Germany’s conservative party, the Christian Democratic Union. The party’s popularity has fared badly in public opinion polls—it was badly mauled in the three state elections in Germany on March 13—ever since Merkel opened the gates to refugees and migrants from a number of countries, particularly war-ravaged Syria.

Merkel’s spin doctors are presenting the recent resolution passed at the European Union’s summit as a “great success” in the refugee issue. German human rights activists suggest that mass deportations of refugees to their countries of origin are hardly an answer to the worsening problem, adding that her government’s action could also constitute constitutional and legal violations that can put her government in the dock.

The EU resolution, which supported Turkey’s initiative to seriously consider taking back the refugees, has meanwhile produced divided reactions from the German public and political spectrum. Nothing has, yet, been agreed upon, but European leaders will grapple with the issue very soon.

While Davutoglu’s initiative purported to stop human traffickers and others exploiting the victims risking death and destruction in their war-ravaged home countries, the new element in his initiative was his willingness to take back all the newly arrived refugees from Greece—”regardless of their origin.”

However, Davutoglu’s initiative also contained a trade-off: for every returning Syrian, the EU would accept a Syrian officially recognized as refugee.

This new element seems to have aroused Merkel’s enthusiasm but her European counterparts, who are outraged by her high-handed suggestions made without consulting them, as prescribed by EU protocol, are less enthusiastic about the entire process.

Turkey’s initiative includes a trade-off: for every returning Syrian, the EU would accept a Syrian officially recognized as refugee.

However, the EU summit declaration “warmly welcomed” Davotuglu’s suggestion, with all the 28 EU leaders agreeing to endorse the core principles embedded in the Turkish proposal. The psychology behind this proposal is that the refugees, once they realize that after arriving in Greece, they will be sent back to Turkey, will stop using the illegal mode of entering Europe and this, in turn, will stop the illegal business of the human traffickers.

But Turkey’s “goodwill gesture” comes at a price. Turkey is keen to see that visa requirements on Turkish citizens travelling to Europe are removed at the “latest in June.” Furthermore, Ankara would like to see negotiations over its membership in the EU are started “as quickly as possible.”

As compensation for the huge financial burden incurred by Turkey in looking after the 2.7 million refugees already on its soil, the country wants the EU to pay an additional 3 billion euros for the year 2018, beside the already pledged 3 billion euros to be paid by 2017.

Turkey wants the EU to pay an additional 3 billion euros for the year 2018.

Merkel has been trying to package and present this proposal to her very skeptic European colleagues, urging them to endorse the proposal at the next summit meeting and achieve the much-needed “breakthrough.” The forthcoming EU summit on March 17 and 18 will provide indicators of Merkel’s relationship with her European colleagues.

But Turkey also faces another hurdle, in the form of resentment from Cyprus, an EU member which, because of its historically critical resentment of Turkey, will put up a fierce opposition to allowing accelerated talks on Turkey’s EU membership. Hungarian leader Viktor Orban has, meanwhile, already made it clear that his country would not be accepting Syrian refugees.

There are also severe misgivings over Turkey’s human rights record, the latest being its crackdown on the press.

Merkel faces a hornets’ nest at home, with human rights activists lashing out at her for suggesting to send back rejected refugees; the Pro-Asyl organization has been warning not to play refugees from Afghanistan or Iraq against the victims of the Syrian civil war.

The United Nations High Commissioner for Refugees, Filippo Grandi, was also “deeply concerned” and expressed misgivings at the European Parliament against the indiscriminate deportation of refugees, as long as there were no guarantees for their protection and the respecting of international law.

The organization ATTAC, which has been critical of the globalization phenomenon, has criticized that Merkel, on the one hand, has been praising the “welcoming culture” in Germany for refugees, while on the other “she has been pushing behind the scenes for the alienation of Europe.”

The parliamentary chairperson of the Green party, Rebecca Harms, demanded that the resettlement regulation must be extended to include, at least, refugees from Iraq and Afghanistan.

The humiliating defeats which Merkel’s party and she herself suffered on March 14 in the three state elections, particularly in the East German state of Saxony-Anhalt, will increase pressure on her to curb the unregulated inflow of refugees into Germany. The success of the rightist-populist party, Alternative fuer Deutschland (Alternative for Germany, AfD) whose only credential is an anti-immigrant platform for the country, has already caused a political earthquake in Germany’s orderly political mainstream.

This will spur the CDU and its allies to strive for a solution that will wean away voters from groups such as the AfD and others. Merkel will work hard to convince her European colleagues to accept the Turkish proposals.

But time is not on Merkel’s side and she will have to pull a rabbit out of her hat if her party is to survive the onslaught of populist groups keen to exploit prevailing anti-immigrant sentiments in the country. Will she be able to send back the refugees already in Germany to their first point of entry—Turkey or Greece—and make the voters understand her position?

German voters can be harsh, as they were on Sunday’s state elections, and they will continue to show their dissatisfaction with her policies at the ballot box if she does not produce a solution that stems the tide of refugees.