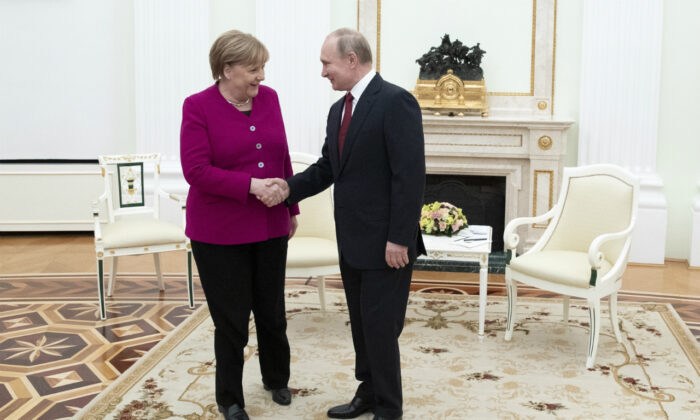 Russian President Vladimir Putin, right, and German Chancellor Angela Merkel greet each other prior to the talks in the Kremlin in Moscow, Russia, Saturday, Jan. 11, 2020 (Pavel Golovkin, Pool/AP Photo)
International

Germany’s Chancellor Angela Merkel proposed to hold an international conference in Berlin, Germany, with both Libyan parties to resolve the crisis in Libya when meeting with Russia’s President Vladimir Putin in Moscow, Russia, on Jan. 11 to discuss the conflict in war-torn Libya.

Putin supported Germany’s proposal, saying, “The Berlin conference needs to ensure attendance of those states that are truly determined to help resolve the Libya crisis, [and] … its decisions should be negotiated in a preliminary plan with the Libyan parties.”

Germany plans to hold a summit aimed to achieve peace in Libya on Jan. 19, the two participants in the preparatory negotiations said on Jan.13, according to Reuters.

On Jan. 13, Libya’s two rival leaders were in Moscow for talks jointly mediated by Russia and Turkey with a goal of bringing an end to the country’s long-running civil war.

Fayez Sarraj, the head of Libya’s UN–recognized government in Tripoli, and his rival Khalifa Hifter came for talks with top diplomats and military officials from Russia and Turkey. The talks were held behind closed doors, and it wasn’t immediately clear whether Sarraj and Hifter will meet directly.

The two mediating countries back the opposing Libyan governments. Turkey supports the Tripoli government led by Sarraj, which has faced an offensive by Hifter’s forces.

Russia has maintained contacts with both conflicting parties in Libya. Still, the government in Tripoli has recently claimed that Russian military contractors from a Russian company connected to a Putin ally have been fighting alongside Hifter.

Putin said on Jan. 11 when answering a question about private security companies in Libya: “that if any Russians are fighting there, they do not represent the interests of the Russian state and do not receive any money from the Russian state.”

Putin noted that mercenaries were sent to Libya from Syria’s rebel-held province of Idlib alongside Turkey’s border, voicing hope that a lasting truce will help end the deployment of foreign fighters to Libya.

Turkish President Recep Tayyip Erdogan said earlier this month that his country was sending military personnel to Libya to support Sarraj’s government. Sarraj visited Istanbul for talks with Erdogan on Jan. 12 before heading to Moscow.

Russia and Turkey proposed a ceasefire in Libya that began on Jan. 12; however, there were immediate reports of violations by both sides.

The European Union Council of foreign ministers recommended at an extraordinary meeting on Jan. 10, to avoid further uncontrolled escalation of the Libyan crisis and it “gave a mandate to the EU’s High Representative for Foreign Affairs, Josep Borrell, to engage with all actors with the objective of moving towards a political solution in the framework of the Berlin Process and the UN–led mediated efforts,”  according to a statement.

Merkel and Putin also discussed the efforts to complete Nord Stream 2—a gas pipeline under the Baltic Sea running directly from Russia’s state-owned Gazprom to Germany.

The United States sanctioned Russia over its Nord Stream 2 gas pipeline as a part of the National Defense Authorization Act (NDAA), which President Donald Trump signed on Dec. 20.

The measure requires administration officials to report to Congress about vessels that lay pipe “at depths of 100 feet or more below sea level for the construction of the Nord Stream 2 pipeline project”, as well as individuals who have provided such vessels or facilitated transactions to provide the vessels, opening up the individuals and companies to sanctions.

The goal, according to the act, is to “minimize the ability” of Russia to use Nord Stream 2 “as a tool of coercion and political leverage.”

Nord Stream 2 was initially expected to be in operation in the first half of 2020 but is now forecast to be completed by the end of the year or in the first quarter of 2021 after sanctions imposed by the United States delayed construction.

Merkel said she believed the project had been legitimized by new European regulation and that Germany would continue to support its completion.

European Union regulation requires that gas suppliers should not own import pipelines and that third parties should also be able to use them. The regulation takes effect in 2020.  “The 1,225-km pipeline under the Baltic Sea is fully owned by Russia’s state-owned Gazprom,” which is also the gas supplier, according to EurActiv.

The German parliament enacted the law in Nov. 2019 that makes Nord Stream 2 compliant with the EU regulations, because the pipeline has been being built, according to Deutsche Welle.

A Swiss-based company Allseas, which was laying the pipeline “has suspended its Nord Stream 2 pipelay activities” due to the U.S. sanctions, according to the company website

EurActiv reported citing Kommersant Daily that Putin said Russia has a ‘pipe-laying vessel’—called Academic Cherskiy—to complete the construction of the Nord Stream 2 gas pipeline.” It was acquired by Gazprom in 2016, to be used as a last resort if European companies stopped working on Nord Stream 2. However, its average pipe-laying speed is slower than Allseas vessels’, reported EurActiv.