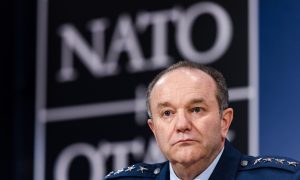 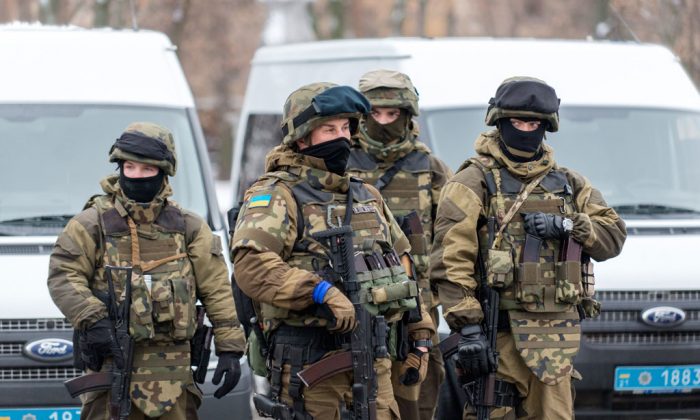 Servicemen of police units and the National Guard of Ukraine stay on the line by their armored cars during the parade prior to the first patrolling in the strengthened mode in northeastern Ukrainian city of Kharkiv on Jan. 22, 2015. The security forces will be on duty in the emergency mode to prevent frequent acts of terrorism in the city last time. (Sergey Bobok/AFP/Getty Images)
Crisis in Ukraine

TBILISI, Georgia—The return of a Georgian fighter’s body to his homeland from Ukraine on Thursday was a grim reminder of how eastern Ukraine’s conflict carries traces of a war of a quarter-century ago.

About 100 Georgian volunteers are fighting along with Ukrainian forces against Russia-backed separatist rebels, Georgian Gen. Georgi Kalandadze said Tuesday. Two are known to have died.

On the other side, fighters from the separatist Georgian region of Abkhazia reportedly have been battling alongside the Ukrainian rebels.

Soon after the Soviet Union disintegrated in 1991, war broke out in Abkhazia between Russian-supported separatists and Georgian forces. Georgian forces were eventually driven out of all but a small corner of Abkhazia, and that minor presence ended in the brief 2008 war between Georgia and Russia.

Abkhazia, in the view of all but Russia and a handful of other countries, is still nominally part of Georgia. But it is fully outside Georgian control and effectively either independent or a vassal of Russia.

In Georgia, resentment over the loss of Abkhazia is deep, and the death in Ukraine of volunteer Tamaz Sukhiashvili appeared to bolster Georgia’s animosity toward Russia. The 35-year-old previously had taken part in the Georgian military’s contingents in Iraq and Afghanistan.

“It is a huge pain to lose each Georgian, but I do understand Georgian patriots who are fighting against our enemies everywhere,” Georgian parliament member Zakaria Kutsnashvili said Thursday.

In the view of some Ukrainian fighters, the Georgians are honoring Ukrainian sacrifices of a generation ago.

In the 1990s, “seven of our guys were killed fighting for Georgia,” said Igor Mazur, head of the Kiev branch of the Ukrainian National Self-Defense, a nationalist grouping. “The Georgians are now repaying that debt from those events.”

“We can understand those Georgians who telephone and tell us that they want to help us, because the Russians will find some reason to turn their aggression again to Georgia, or maybe Azerbaijan and Lithuania,” he said.

And Sergei Urashka of Ukraine’s Aidar battalion, a volunteer unit under command of the Ukrainian Defense Ministry, said the Georgians have been a strong asset.

“They help me to prepare my fighters, because they are more experienced. “Some of them have been in four wars, or even more,” he said.

From The Associated Press. Jim Heintz in Moscow contributed to this report.