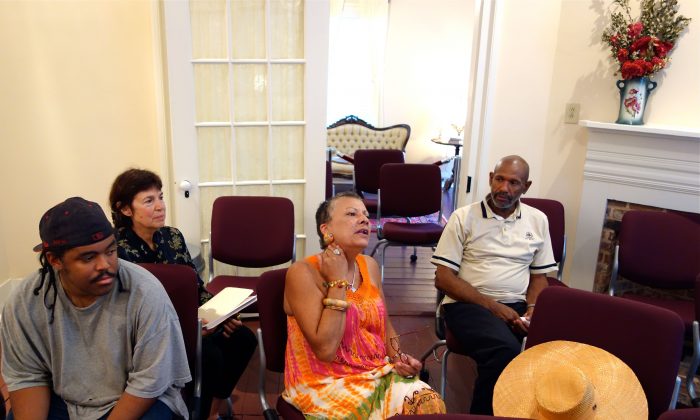 MILLEDGEVILLE, Ga.—Georgians gathered at a historic house in Flannery O’Connor’s home town on June 4 to learn more about the lives, the sufferings and the hopes of people in China. Dietrah Taylor, director of the Sallie Ellis Davis House, chose the anniversary of the Tiananmen Square Massacre to show “Free China: The Courage to Believe.”

Taylor’s timing was perfect. The movie was released theatrically June 7.

It tells the story of two people who survived China’s brutal reeducation through labor system. Jennifer Zeng was imprisoned and tortured for practicing the spiritual discipline Falun Gong, she said in the film.

Zeng was forced to make sweaters and to make stuffed toy rabbits, for no pay, under horrific conditions. American citizen Charles Lee was detained for three years, charged with intending to broadcast material contravening government propaganda. Lee said in the film he was forced to make Homer Simpson slippers for a New Jersey importer, while subject to torture.

A great-niece of Sallie Ellis Davis came to the screening, wearing an elegant wide brimmed peach-colored hat. Evangeline Wood’s great aunt was an African American teacher who finished college in 1899. Her school was the only one for black students for many miles.

Davis was so devoted to educating people that she opened her home to her students who came from far away. Woods said her aunt’s students treasured the chance to learn, regarding it as their only chance for a better life. Though some were rough, big men, “she never had a moment’s trouble from any of them,” said Woods.

A small group stayed and talked long after the end of the documentary. They spoke of race, of family, of judicial corruption, of courage, of the American civil rights movement, of human rights in China and of secrets.

Woods said her ancestors owned much land, but pretended to be sharecroppers on their own farms so that they did not inspire envy. The land could have been taken away judicially, she said.

Taylor said the idea of America importing goods made by labor camp prisoners reminded her of slavery. She wondered if there was a list of companies that use labor camp goods.

William Akbar asked if our government has protected the rights of Falun Gong practitioners in China. He learned that Congress has issued resolutions supporting Falun Gong.

Archbishop Desmond Tutu and human rights lawyer Chen Guangcheng issued a statement June 4 in which they wrote in part, “the brutal repression of freedom of thought, conscience and speech, the most basic of human rights, will remain a festering sore on the China dream until it is addressed and removed.”