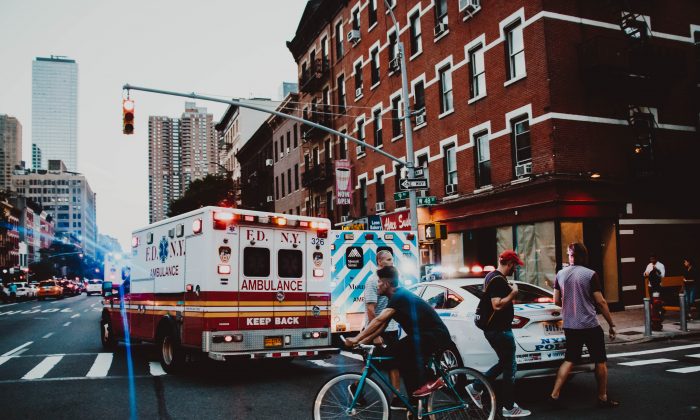 A stock photo of an ambulance. (Benjamin Voros / Unsplash)
US News

A Georgia woman was charged in the death of a baby dropped during a fight that was caught on surveillance video, according to reports on Aug. 13.

WALB-TV reported that 30-year-old Terra Shanquelle Brown turned herself in on Aug. 11 and was charged with second-degree murder, second-degree child cruelty, and affray.

Officials said that she was pregnant during the time of the fight, which took place last month.

On July 23, police arrested 26-year-old Karen Lashun Harrison and her friend, 26-year-old Carneata Clark, after they allegedly lied about the fight that led to the death of Harrison’s child, reported the Atlanta Journal-Constitution.

Harrison told police that the child fell from her arms. But surveillance video showed Harrison and Brown attacking one another in front of a beauty supply store on July 19.

In the video, Harrison is seen dropping her baby. The next day, the baby was transported to Colquitt Regional Medical Center for a head injury, and the child later died.

In an interview with WALB, Clark said that there is more to the incident than meets the eye.

Georgia Mother Charged with Murder After Dropping Her Baby During Fight https://t.co/Cs5KJQULqs pic.twitter.com/L58igItEJd

“People on the outside looking in, they don’t even know the whole story, you feel me. I feel like, free Karen, all the way,” said Clark.

Officials told WALB that more charges could follow in the case, including for the woman involved in the fight with Harrison.

“Preliminary information indicates that the baby died as a result of medical attention not being sought and based upon that, the warrant was issued for felony murder,” said District Attorney Brad Shealy.

“No charges at this time, doesn’t mean some couldn’t come out in the future, based upon the evidence,” added Shealy.

#DriveOnJoy with ⁦@lexisbill⁩
Georgia mother, 26, is charged with MURDER after fatally dropping her three-month-old baby during a fight with a woman outside a beauty store then ‘lying about how he became injured when she took him to hospital’
Your take? pic.twitter.com/A374Sn1Keb

Regarding the charges, “We investigated the incident and determined the baby did not receive his injuries how it was reported,” Lt. Freddie Williams, with the Moultrie Police Department, told reporters.

“It was reported to us that the baby had fallen from the caregiver’s arms and received the injuries, then we got information that there was a fight,” he added.